That New Game by Fugue 9

Jack: I don't-- (shrug) I don't know, Prof. Williams. I mean, you sound like you're in quite a mess because of this game--

Prof. Williams: Show a little spine, I NEED your help. I need you to help me earn some power points in the game so that I can FIGHT these horrible young men trying to take advantage of me!

Prof. Williams pushes him down into the chair and shoves the controller into his hands. I NEED your help, Jack, she tells him, you're the ONLY ONE I can turn to. Now come on. 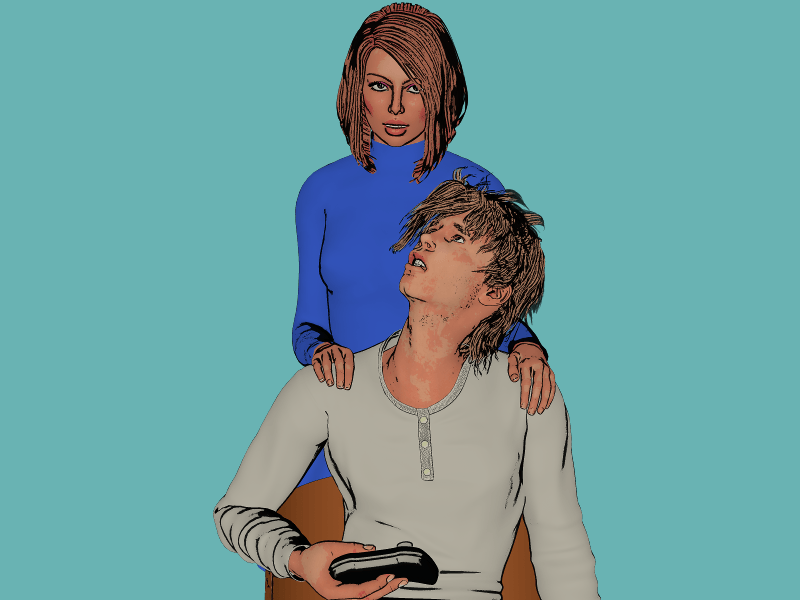 He starts manipulating the controller while she walks him through simple game play.

Prof. Williams: Yeah, so the little half-dressed floozie laying on the Status box is the “Game Angel”. She'll give you game status, and sometimes hints. Plus, she's how you know you're still in the game -- that, and the background is usually orange while you're in the game.

Jack: Uh, wait a minute-- what do you mean “how you know you're still in the game”?

Prof. Williams: Weeellll, it gets a little confusing sometimes.

Jack: (brows raised) Whether you're ... still in game or not?

Prof. Williams: Yeah, but don't worry about it.

Hmmph! Jack thinks, THAT’s the first clue that the game is dangerous! You should NEVER get confused about whether you're still in the game or out of it!

Fugue: Confused about in-game or out-of-game -- I don’t like the sound of that!

Jack, what are you getting yourself into, buddy?!

(Next update, I'll try colored fonts instead of colored highlighting for character speech.)

I've been trying to get two bonus "shorts"/episodes to you guys each week for the last month or so -- but I'm not going to be able to do that this week. Way, way too many crises at work this week. I may still be able to get you all one "short" this week -- I have it written and illustrated already, I just need to get it posted (so need to find a free hour to do so). If I can, I will.

Hopefully, things will be a lot quieter next week, though some of the issues this week look like they may bleed into the first part of next week. It's a pain in the rear too, because I'm having so much fun with That New Game by Fugue. I have the next three episodes after the next one (i.e. episodes +2 to +4) mostly written already, I just need to illustrate them. So we'll hopefully be back to two bonus episodes next week, but, if not, then by the following week.

Attached is one of the images from the next episode, to tide you over until I get it posted.

Everyone have a great weekend! Fugue

That New Game by Fugue 10

Prof. Williams: (excited) Check your inventory, Jack! What do you have that we can use? 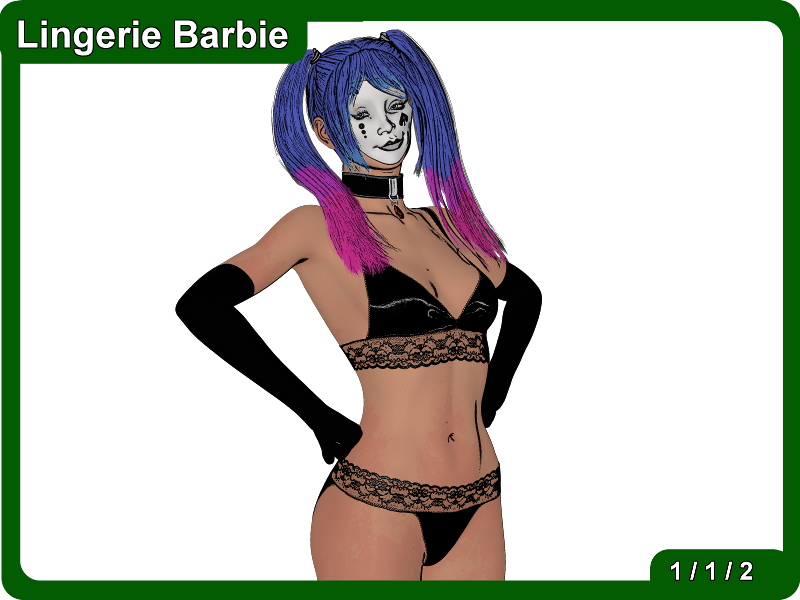 Prof. Williams: (deflating) Aww, that’s just a level-1 card. I was hoping for something bigger.

Prof. Williams: Hey! Be CAREFUL with that!

Goddammit, Jack! she gripes as she reaches for the doll and takes it from him. I wish you hadn’t done that! The other young men have taken all my defensive points and cards, so I just automatically lose in combat now - that’s why I need to get more points!

Yes, we did, she sighs dourly, then … absorbs the doll into her game body.

Jack studies her a moment, but doesn’t see any effect. What, uhm … happens now?

We get to find out now, don’t we, she snaps at him. Well, check the rest of your inventory -- see if you have anything else that might be useful.

Jack navigates around in his inventory, checking out the various categories. It looks like I have some “willpower” points, but that’s about it. He looks back up at her and- ohboy! Uh-uhm-y-you’re-

I’m what? she looks down, then sighs. Well, HELL! I guess I get to be EYE CANDY for you now!

Yeah, THIS is what YOU did to me, Jack! When you invoked your card! Her voice wraps tighter and tighter around a sarcastic note. Now *I* get to play “Lingerie Barbie”! GodDAMMIT!

Yeah, well, you’d BETTER help me get some defensive points and artifacts now! After getting this (sarcastic air quotes) FREE SHOW put on for you!

Fugue: Geez, Jack - you coulda at least bought her dinner first, before invoking the Lingerie Barbie card on her.

And, knowing you, you probably really didn’t …

That New Game by Fugue 11

Jack: I've heard that name before -- is he a student at the college? He's a senior, isn't he?

Yeah, Prof. Williams nods. And a real perv. At least while he's playing this game. He's already made me do ... things.

Where is he? How do you know he's around?

There, look at the game's aerial view -- here, click this button, and you can see close up.

Jack: Oh my God! What is he doing with Prof. Whitmore?!

I'm defenseless here, Jack, she tells him. And I don't intend to become the matching bookend to Lisa Whitmore over there.

You have some defensive points left -- go ahead, fight him. I hope you don't lose. But I'm outta here. 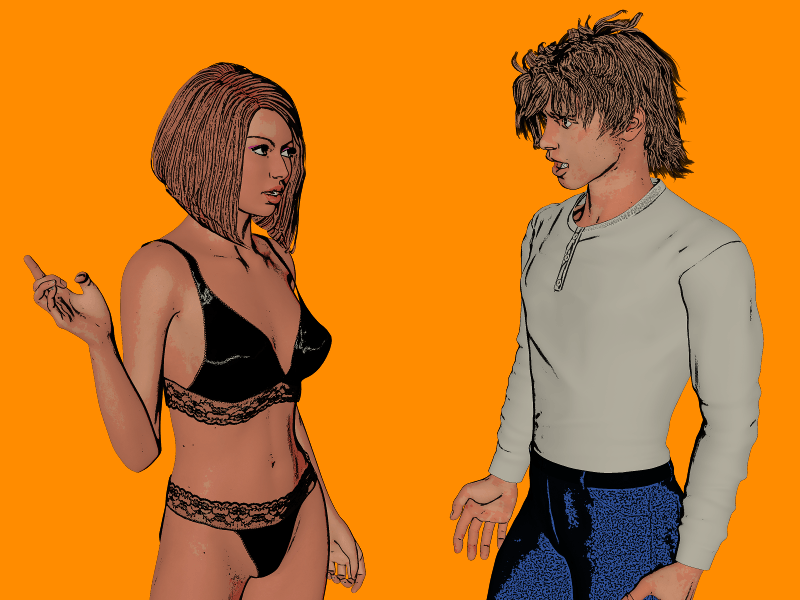 Fugue: Well … I do kinda like Prof. Whitmore’s business-on-the-top and slutty-on-the-bottom fashion style.

That New Game by Fugue 12: What Crotch-Grinding?

What crotch-grinding? She looks down. I'm not--

Goddammit, Paul! I TOLD you to stop TRIGGERING me to DO that! 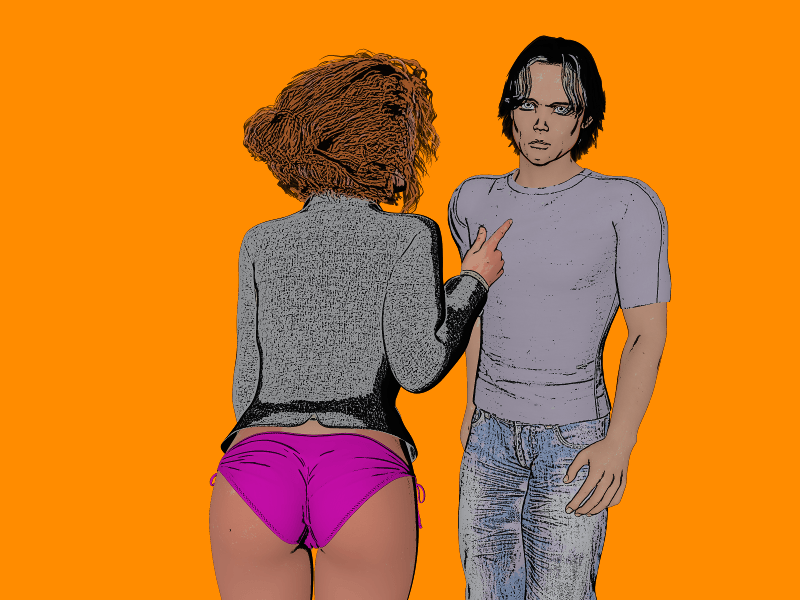 Fugue: Ach, Jack -- the guy looks pissed. And with an ass like Prof. Whitemore's at stake, well ... you can maybe understand why.

(Also, I may only get one episode/short of "That New Game" posted this week. I've been working diligently on Dr. Diggler, even at night when I'm supposed to be relaxing with some television -- which is when I usually get bored and work on these shorts. So these little episodes are running slightly behind.

Of course, these episodes/shorts are to keep you guys entertained while I work on Dr. Diggler over the next several weeks. So if "Dr. Diggler" robs time from "That New Game", it just means that you'll get Dr. Diggler that much sooner -- that ought to even be a plus to some of you all (grin)!

Now back to the diabolical Doctor for me -- I'm writing/illustrating like mad!)

I'll be asking for "Battle of Wills" opinions later 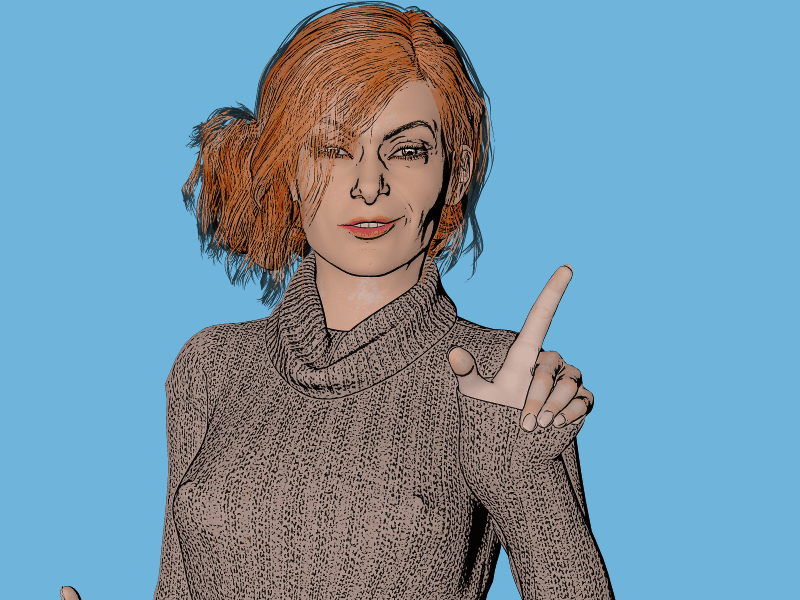 "Eh?" Fugue lifts his head off the table where he fell asleep beside his computer. At least he didn't fall asleep ON the keyboard, and short it out with drool overnight. "Oh, it's you guys. Good morning." He's still a little cross-eyed as he continues to wake up.

To keep my sanity, I had to go ahead and tweak Ganesha, the javascript engine I use for these interactive stories. Otherwise the dance of escaping special characters -- especially quotation marks -- between the HTML and javascript and story conventions was going to bring me to tears.

In turn, I had to slightly change the conventions Ganesha uses to mark up stories (note: this is exactly why I'm test-driving Ganesha on several full-sized istories before making it freely available so that any of you can use it to write your own interactive stories if you want -- this way none of you have to be inconvenienced that Ganesha ver. 3 has slightly incompatible mark-up from ver. 2).

I finished re-marking-up all the Dr. Diggler level 1 pages over the weekend, and will move to the level 2 pages next.

I'd already added some new content to "Dr. Diggler" before the Ganesha-tweak, but as I revisit the pages, I'm finding myself wanting to tweak small things in some of the older pages. The "Battle of Wills" scenes, for instance, where Bryan and Trish verbally vie for dominance -- the layout and flow of those pages seem blander than they should be. I know I'm working with javascript instead of flash or other technologies -- but still, those pages should be a little more exciting. I'm likely to work up a couple test-images for alternative layouts and get you guys to informally vote on them if you have a preference -- so expect that soon.

On the "That New Game by Fugue" front, I was 3-5 episodes ahead of what I was posting a couple weeks back, but I've drained that buffer now, so I need to write/illustrate several more episodes for that storyline as soon as I finish re-marking-up level 2 of Dr. Diggler. And I do have plans for gathering the "collected episodes" together in a single frequently-updated istory to make them easier to read in a single sitting.

Oh, and the attached PNG is another test-image of Jack's mother-in-law, from "That New Game by Fugue". I definitely have plans for her in an upcoming arc ...