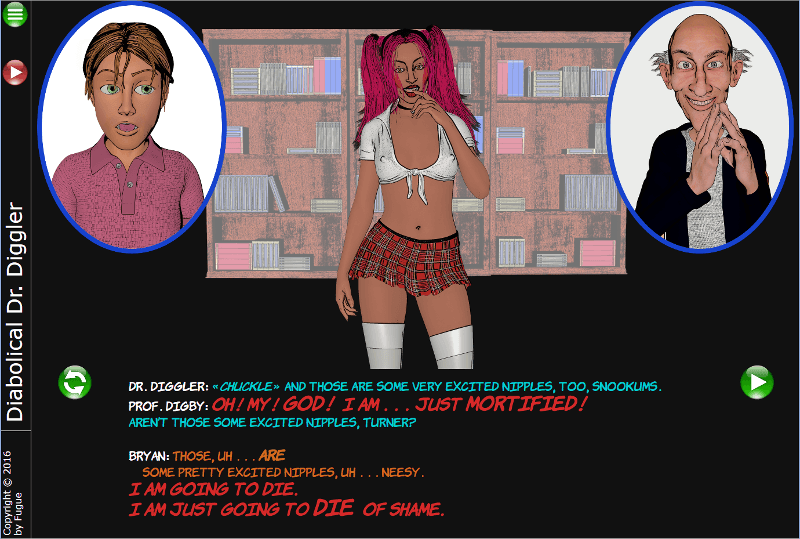 When last we left our uptight Prof. Digby, she had confronted and insulted Dr. Diggler. Not necessarily a smart move. Dr. Diggler had in turn convinced her to put on a skimpy little outfit that she was aghast to wear, AND to model it for both him and a student. Her shame just knew no bounds ...

Well, actually, her shame got even thicker and stickier, because she still needed to put on the pigtails. The big pink pigtails. And now her body is reacting to her shame in an unexpected way, as she stands there ... on hot, sexy ... display ...

Another reflection on game-making follows below. I'll probably have just this reflection and one more after this, then I'll get back to the "That New Game by Fugue" episodes. (These reflections are quicker since they're mostly just writing. I'm working hot and heavy on the Dr. Diggler game, and it's been jealous of my illustrating time. I've almost doubled the content of Dr. Diggler, by the way, and am still going -- level 2 will probably be the biggest level of the 4 planned levels.)

Yeah, how do you organize content, to keep track of it, so that you don't lose parts, or leave holes ...

So far, organizing it as a 4-level hierarchy has been mostly workable for me. I'll probably eventually fine-tune or change aspects of that, but it's working well enough for now.

At the top level of the hierarchy is the game level -- 1st, 2nd, 3rd or 4th, in Dr. Diggler's case. This assumes a pretty big difference in levels, and not just a "the sprites move quicker in level 3" kind of thing.

The second level under that is a major action or location. In Dr. Diggler's case, we can (along with our hero) do these things during the morning hours: Study, go to the B&W Shoppe, go to Diggler's Office, or go Tutor someone. And during the PM hours, we can Chat with Trish, try to have Trish Model clothes for us, go on a Date with Trish, or give Dad a call.

The third level under that is variant event that can happen with that action or location. In Dr. Diggler's case, if we go to Dr. Diggler's Office, we might bump into brainiac student Alice slinking out of his office; or bump into flat-chested Prof. Gatsby coming out after a colleague quickie; or bump into Prof. Digby snooping around to stoke her fires of self-righteousness; etc.

The way you organize your game content is obviously going to very game-specific, but you do have to organize it some way to keep yourself sane (and to keep from creating a shoddy game). The above is not necessarily the best organization, but it's working well enough for now -- and it may turn out to be one of the better approaches, who knows.

If anyone else has ideas or other approaches to organizing content, I'd love to hear. If there are enough responses, I'll make a separate blogpost to share and credit them.

Ha, yeah! No, I'm having way too much fun with the Dr. Diggler sequences to keep them to myself. So here's the preview of Patricia in just hose and gloves a week early. Her good parts are covered by Bryans' poor shocked mug in the emailing, though he gets out of the way of her breasts in the blog entry. You WILL have to wait for the game for him to get out of the way of her pelvis, though ... sorry.

A little better resolution .png of the main image too ... 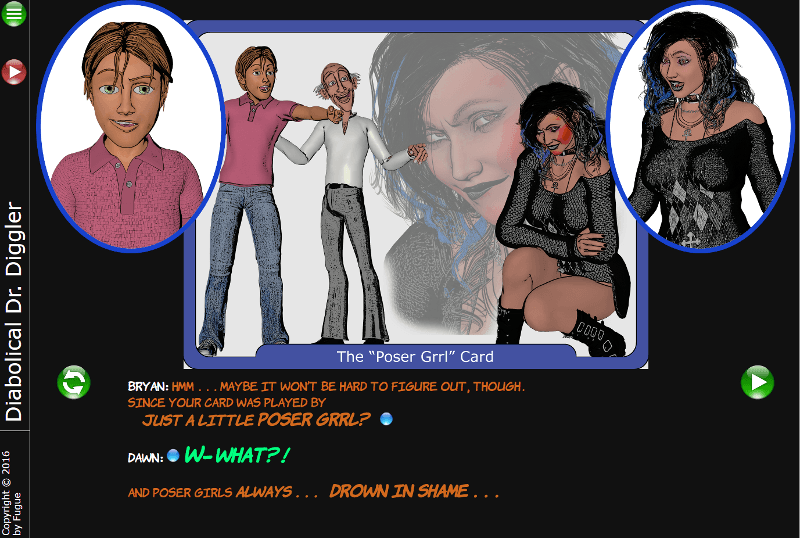 On his way to becoming more assertive (read that: dominant), which is part of Bryan's mission during level 2 of DDD, he learns to come up with arguments (shown in the game as game cards) to beat other people's arguments (to trump their game cards). One of the folks Bryan practices with is a hot little goth girl, Dawn. Or ... at least he thought she was goth. He comes to realize that the pretty college sophomore just wants to be hip and cool, and is just pretending to know a lot about goth culture. A poser. And he finally formulates a game card to call her on it ...

And yes, there are some nekkid rewards at the end of this little card game ...

In the other image, Patricia catches Mrs. Campbell, the head of Tutoring Services at the University, abasing herself with fellatio on a very self-satisfied Dr. Diggler back in Patricia's own bedroom. (The image is on my blogsite at the URL below -- I can only attach one image to the Patreon posts, and the Dawn image won for today's post.) The image actually looks dirtier than is really is. Technically, it only shows breastal and buttocksical (pronounced like paradoxical) nudity, so you COULD try arguing that it is no more than very strongly PG-rated ... (Yeah, see if you can make THAT argument fly ...)

Oh, and a couple of you asked about the little red button up near the top left of the screenshots. That's my "debug" button while I'm writing these game passages. I click on it, and it lets me jump into the sequence I'm working on to see how it looks and reads. Over and over ... and over :) While writing and illustrating, you retrace through a sequence of passages MANY times ...

A reflection on writing games follows below -- pretty much my last at the moment. I'll continue next week with previews as I keep working hard on Dr. Diggler, and if I can fit them in, a few more episodes of "That New Game by Fugue". Read further if interested, or enjoy our goth beauty, shocked that she was called on her lack of expertise; that plus ... well, whatever the hell it is that Mrs. Campbell is doing with our antiquated professor ...

Anyone that's written much knows that authors fall somewhere in a spectrum between two approaches. The "tight-leash" author dictates to his/her characters. He/she knows that Darla will pledge true love on page 48 -- not a page before, and not a page after. "Loose-leash" authors give their characters and scenes more freedom to unfold freely. At the extreme is the author that says: hey, I just throw the characters into the scene, and I don't have the least clue how the scene will end; I write to find out, just like the reader reads to find out.

So that was one of my concerns when I started playing with iStories and games -- is my throwaway going to be too expensive, what with all the time-consuming illustrations and game logic? Am I going to have to pre-plan more than is comfortable for me with writing -- is that going to suck all the fun out of writing a game?

Well, this isn't the final word, but I'm starting to feel that the throwaway isn't too expensive, even with illustrated games. Yes, I scrap scenes and rewrite them; and quite a few illustrations get revised 3 or 4 times before I'm happy enough with them.

(FWIW, I do use 3D software to draft out the initial version of illustrations -- mostly because I would otherwise fuss over facial likenesses for hours. Then comes the manual part with the Wacom of creating the cartoon lines and shades, correcting flaws, emphasizing expressions, etc. In the end, I spend about 50% of time/work with the 3D software, and 50% with postwork for most images. When I revise an illustration, much of the 3D work comes forward easily and just gets tweaked; however, postwork is totally lost and has to be redone entirely each time.)

Anyway, a fairly loose-leash approach CAN work with writing games and interactive fiction, I think. At least so far (and I have hundreds to thousands of passages written at this point), I haven't been faced with throwing away enough work to make me cry :) 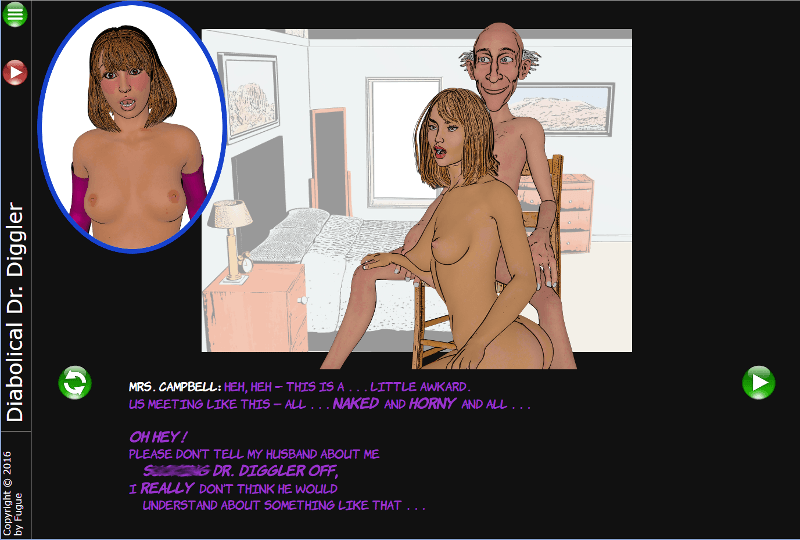 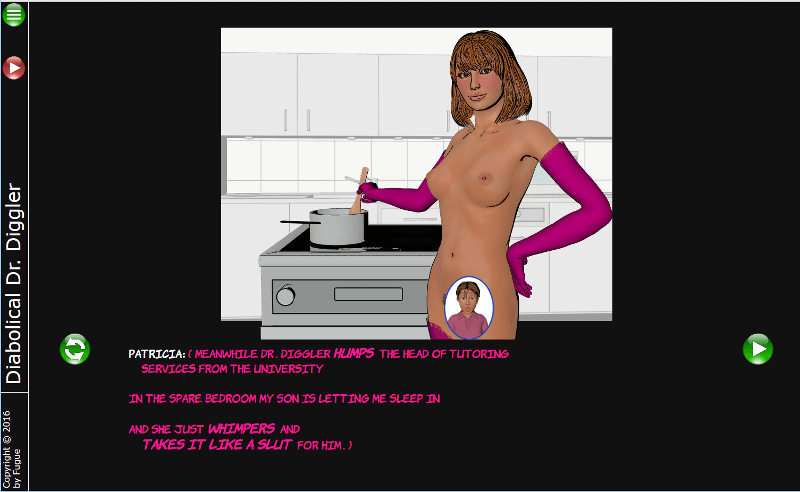 Just a quick additional peek of the work I'm doing on Dr. Diggler. I'll probably share more a couple more times in the next couple weeks, though there's not time to do it much more -- I'm aiming to release ver. 0.6 the second half of next month.

On the one hand, it won't have level 2 entirely finished (it'll be about 80-90% done). On the other hand, that's not because of lack of effort, but instead because level 2 will be the biggest of the 4 planned levels. Ver. 0.6 is about double the number of passages from ver. 0.4 (and about twice as many images likewise). VERY rough estimate, it may be about 50-60 MB to download (thanks to Umgah's pointing out several PNG compression utilities to me a few months ago). It'll also be playable online like it currently is as well.

I'll release it first to 5$ and above patrons next month (as a huge THANK YOU! for your support!); then I'll release it to everyone for free around the first of November.

Back to work now! Fugue