The topic came up on the Hypnopics Collective forum a few weeks ago, that I thought I’d bring up again here, just to honor the guys that got me thinking about interactive stories and games. You may have already heard of them - they’re fairly big names in their fields - but if you haven’t you might enjoy their stuff too.

On his blog (http://smuttyfootnotes.blogspot.com), besides releasing new installments of The Adjusters (and you can get them there earlier than EMCSA, if you get impatiently eager), he also mentions the best-of what he has been reading. It must be about a year an a half ago, he mentioned an interactive game, Princess Trainer, by Akabur. I took his advice and tried it and - WOW! What fun!

Normally I’ve never been a big fan of games, but I lucked out with Princess Trainer, because Akabur (https://www.patreon.com/akabur) is a natural genius at them. He’s also done Witch Trainer (with Hermione from Harry Potter) and Broken Heart Bordello, but Princess Trainer (with Jasmine of Aladdin fame) is still my favorite!

You play Princess Trainer, and you find yourself getting more caught up in the storyline than any plain text story normally gets you involved - or at least it did for me. And that got me to thinking, that … that’s a good thing. If you can consistently get readers that much involved with the characters, then you’ve delivered an oustanding story for them.

I pledged on Akabur’s Patreon account from when I found out about Princess Trainer (from my non-creator account there) and have stayed with him since - he’s that good. Also, his Patreon posts led me to other great artists too - Xaljio (https://www.patreon.com/xaljio), Latissa (https://www.patreon.com/latissa) and DAHR (https://www.patreon.com/akabur). Xaljio and Latissa just released a preview of Library Story that they’re working on - it involves Belle from Beauty and the Beast, and I cannot wait for it! The preview was outstanding (though it makes it that much harder to wait for the full release …). And Xaljio and DAHR are working on Iris Quest, a continuation of a female character from Princess Trainer, and also looking very promising from previews!

Anyway, I just wanted to acknowledge the folks that opened my eyes to what interactive stories/games could do for readers, that plain text stories often struggle to do. I was lucky enough to start off playing/reading works from some of the best in the field. 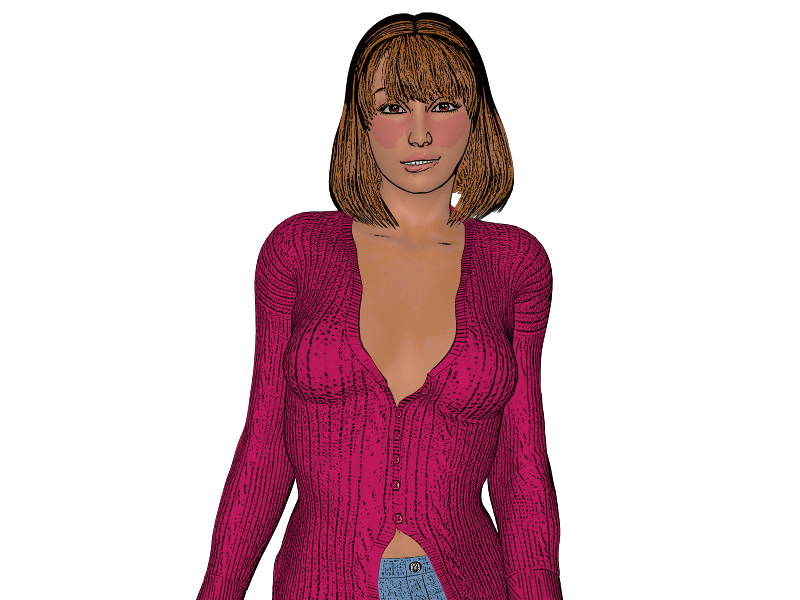 Well, I had a great time drafting out this sequence! It’s a preview from Diabolical Dr. Diggler ver. 0.4, which I plan to release in the next couple weeks. (It doesn’t have as much additional content as I would have like - of course, they never do - but it will be using the updated “Ganesha” iStory engine, so this will also fix problems that folks without extra-wide screens had, with text trying to hide under the images.)

This sequence occurs during “level 2” of the iStory, after Bryan has passed his first exam, and he’s studying to pass the second. You (while you’re playing) manage to talk (argue?) Patricia into going out on a date, though nothing turns out like either of you planned. It’s still kind of a fun ride.

Hope you enjoy it! Fugue

I’ve been quiet this last week, working hard on getting Dr. Diggler ver. 0.4 ready to release. Don’t get hopes too high - it does have some fun new sequences, but not as many as I would prefer (heck, I’d prefer to give you all the finished result!). Converting ver. 0.2 to the new iStory engine format, and re-doing some of the images to even out the tone a little (and I’m not going to get all of them, just the worst) took a bit of time. But this version will let you pass exam 1 and play around a little with level 2 after that; and with the new engine, it will work for folks without extra wide screens.

For any aspiring iStory/game writers out there, I’ll share little bits of what I’m learning. I’ve been trying to draw little maps and graphs of plot, trying to find the best approach to keep everything consistent and work out all the details. I don’t have the best approach (for me at least) figured out yet :( . But I’m still working on it! I’m thinking and trying this process: for me (and for any others out there approaching these from a writing background), so far it’s best to work out the major pieces and paths of each level, stubbing out parts to get a boring, bare bones version working. Then you can come back for the fun part and decorate those bare bones with all the interesting stuff.

Keeping the sequences and actions matching up for all the different paths through what you’ve set up is a bit more complicated than keeping a single chosen path through your world consistent (which is what writers are used to, just tracking one set of backstories and plot details, rather than an unlimited set).

So that’s my thinking right now on writing iStories/games. I’ll revise it (guaranteed), but that’s my take so far.

Diabolical Dr. Diggler early release ver 0.4 is now available. The iStory is redone to use the newer version of the Ganesha engine, so will be better behaved for smaller screens. It fills in most of level 1 and partially adds level 2 (out of 5 levels that are planned), with some 15 new story sequences. (One part I still need to do - I have clothing items purchasable from the B&W Shoppe in level 2, but haven’t yet added the “model them” action for Patricia … sorry.)

I had an idea and spent a bit of last-minute time creating an “Index” page, available when you click the menu icon at the top left. This page shows how many major sequences are still awaiting discovery (for the ones you haven’t worked through yet); and lists the major sequences that you HAVE worked through, in case you want to revisit them. It should help you guys know where to put more effort into playing because more content awaits you. It’s an experiment - let me know if it helps.

Even with the Index page available, there’s still two or three spoilers/hints I’ll make available in a few days.

Wow, that was easy! A guy emailed me that he had copied Dr. Diggler to his android, and it was working.

I had hoped it would be fairly easy. That’s why I went with the Ganesha engine, which uses just HTML and Javascript, with all their resilience and versatility (well, for that reason, plus so the security-conscious folks wouldn’t have to run a strange .exe).

Still, I figured there would be snags - nothing goes that easily …

I just tried it on my tablet. After a minute to copy the files, I opened it in the browser. And … it works! The only thing I’ve seen so far is that I’m not sure yet how to hover over the choices in the clothes Shoppe in level 2.

Hey, thank you Good Fortune for easy and snagless! Fugue

It sounds like the Index page is helping a lot with knowing where to spend effort in the game - that’s exactly what I was hoping/thinking it might. There are two more hints that may still help:

2. In level 2, when working to get Trish to wear her t-shirt to study, keep in mind that she has to be submissive enough before she, well, submits to that; make her submissive by giving her permission to continue during early study sessions.

I’m still refining my plot-mapping diagrams, but am still excited about Dr. Diggler from while I was drawing plots for levels 1 and 2 - so I’m thinking I’ll continue working on Diggler the next few weeks. I’ll also be scribbling some previews that I hope to get you all every two or three weeks or so - my mundane job permitting.

Hope everyone has wonderful holidays! Fugue