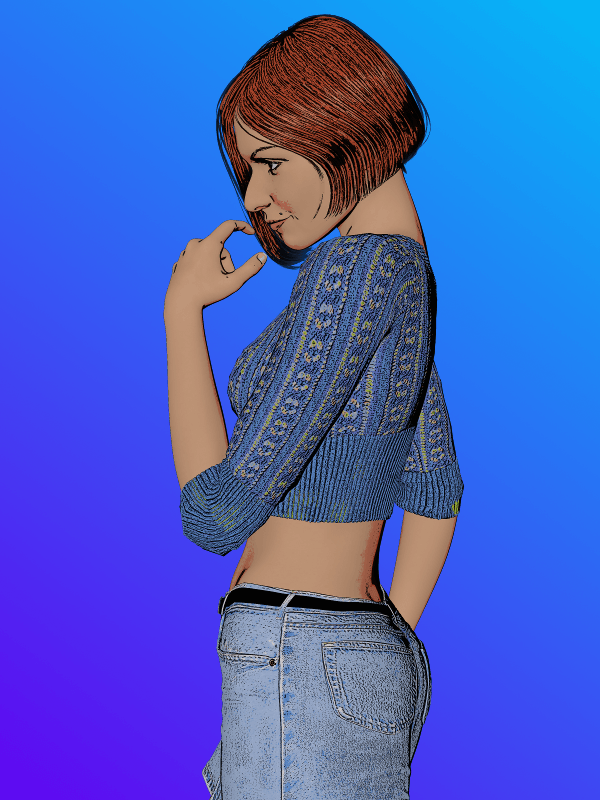 The lady attached isn’t playing any characters yet, but she’s auditioning for the job. Not sure what character I’ll have her play, but it helps if I keep a pool of a few “actors” developed and ready to go; otherwise it dampens creative thoughts when I have a story idea but have to stop to develop the characters (what should they wear? what kind of hair? long straight nose, or little button nose? big eyes, or squinty little things? etc.).

I’m also doing study sketches for two other things. First, in “Dollars and Sins preview 3”, Rob uses his next dollar (oh, before I forget: SPOILER ALERT for this paragraph and the next two, in case spoilers bother anyone - personally, I love them) … anyway, he uses his next dollar to get Madolyn to meditate on certain things that he tells her to. So I want to have the main image area be sort of the “imagi-cam” of the visualization he’s giving her to perform, and actual him and her at the top-left and top-right corners as they discuss the visualization.

Right now I haven’t come up with anything better than just a vague smoky/cloudy background behind the imagi-cam area, sort like the old dream sequences in movies and TV shows.

Second, and this one’s a little harder, I want to have something like an “astra-cam” (and that’s not quite the right name for what I want either). I want to have the characters interact with each other in the main image area; and if she or he is really obsessed with something in her/his thoughts, I’d like to be able to show that at the top right corner or something. So, for instance, if our hero is lying, they might keep a straight face in the main image area as he tells his lie, but in the top right corner, perhaps show him malevolently rubbing his hands together. Sort of like a cam into what’s ACTUALLY going on, but I haven’t thought of a good nifty name for that yet, nor how to visually denote that. If anyone has any brilliant ideas, speak up, and I’ll give you credit. Otherwise, I’ll just keep turning it over in my head until I come up with something …

Back to business, working on “Dollars and Sins, preview 3” right now; expect to have it ready perhaps late this month or more likely early next month. And thank you all again for your generous support!

Another Character Audition, and Trying a Better Home

A friend has been helping me get set up with what I hope is a little better homepage. At the previous site, http://fugue123.com, I had to keep things pretty much sexy-but-PG-rated unless I sent you all off-site. And having you all download ZIPs offsite was a problem too, since I couldn't make any fixes without getting a whole new download link, and anyone following the previous link still got the unfixed version. Plus a couple of the links wound up breaking themselves over time, etc. ...

So, with the understanding that I'm still moving in, and there are guaranteed to still be a few broken links and typos, etc., take a look at the new place, http://fuguetales.com. I don't need to be QUITE so strictly PG there. And you can actually go through the iStories online (I still expect most to download the ZIPs since it's still a little more responsive that way -- though it did surprise me how little a difference there was).

There's already one known issue -- if you try to go through Dr. Diggler online, there are a few broken links due to upper/lower case issues (when you downloaded the .zip file, most of you are on Windows, where things are case-insensitive, so it wasn't an issue, and I got sloppy with the letter cases). I need to go through and normalize all the upper/lower case in the html and filenames, though it's a pain to pause the work I'm doing on Dollars and Sins to go back and do that (annoyed-at-self eyeroll here).

I'll send out links to the patrons-only stuff (like the later Dollars and Sins previews and the Gallery) -- I think most patrons have already gotten those, though, either when I uploaded them or when I sent out the Welcome-and-Thank-You email when you joined our group of patrons.

If you see anything hugely broken, let me know, but I think most of it works tolerably well at this point.

And welcome to the new digs! Fugue

Some folks seem to like the fun of multiple on-going projects; for some, though, it seems a little jarring that I have 3 projects (soon to be 4) all on-going. Hopefully not too jarring, as that's the way I tend to work -- update this project for a while, then let it set and develop in my subconscious for a period while I work on another project before coming back later. For the folks that like one project wrapped-up before going on to the next, it may help to think of them as semi-interactive comic strips with periodic updates, perhaps ...

(On a side note, you can see the psychology working, as people tend to be about evenly split into open-ended folks and wrap-things-up folks -- P versus J in Meyers-Briggs, if anyone is familiar with that. And this simple difference in traits can even break up a marriage if the partners don't allow each other their different approaches in life.)

Also, one of the goals I took when starting these projects is that they can be released in incremental pieces every few weeks, instead of you guys waiting for X many months on just faith (which asks a lot of you -- to just trust on faith that good works are coming). I just happen to be intermingling the incremental pieces to keep things fresh.

So -- about that soon-to-be fourth project. While I'm working on the Dollars and Sins previews, an idea keeps mellowing in my head about a conspiracy -- not a vague "no idea who did it, but they did it to almost everyone" conspiracy like Heavy Petting; more of a specific conspiracy where finding out who-and-how happens earlier in the story. More sluttified wives than step-mom and step-sis seductions, though there will be a small amount of that too. I'm repurposing a title for it, "Attitude Rectification," from a fun but unfinished and unreleased text story I wrote.

I'm seeing the opening scene something like this: a female employee filing a grievance comes into the boss's office to discuss it. He explains to her that she's already been treated to be okay with all this, she's just blocked it out of her memory. She scoffs. He calls in the head of H.R. to confirm his statement. The head of H.R., a 30s-something lady, comes in dressed not quite appropriately. She does confirm that our heroine has indeed received treatment (attitude rectification), so this grievance of hers is just so much frivolity.

I doodled a couple auditions for the characters while watching TV. The H.R. woman is above and below (if you're reading this on Patreon, click here -- http://www.fuguetales.com/blog.html#blogcur -- to switch over to my site to see the second image). I'll post audition doodles of our heroine and her big boss/CEO in coming days. 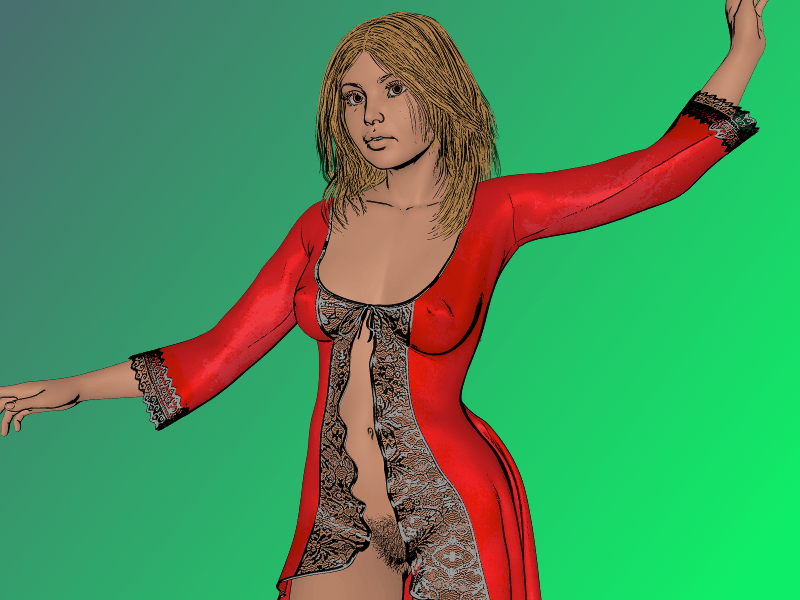 I promised you guys the audition/quick character study for one of our heroines in Attitude Rectification -- the young lady above and below is the leading contender for the role.

Also, for those enjoying "Dollars and Sins," I've submitted text chapter 4 at Literotica. Give it, oh, three days, and it should be available at https://www.literotica.com/stories/memberpage.php?uid=2983069&page=submissions.

I also picked out three images from the Dollars and Sins Preview 3 (which will also be available soon as a "thank you!" to full patrons) and submitted them at Literotica -- they should be available (for non-patrons too!) at the same URL as above in a few days.

I submitted chapter 2 of Dollars and Sins at EMCSA -- it should be coming out this weekend. It's too late in the week to submit chapters 3-4 there, but I'll send them to Simon early next week, so they should show up there the following week.

That's about it. I'm laboring on D&S preview 3 (up to a little less than a hundred images now). Oh, and I owe you guys an image of the CEO villain of Attitude Rectification -- I'll post him in a few days (he's a real bastard, let me tell you ...).