That New Game by Fugue 1

Is that Professor Williams, our favorite teacher of literature ... playing a video game?

Fugue: What can it mean? An esteemed professor playing a video game? And a game produced by Fugue Labs, at that?

That New Game by Fugue 2 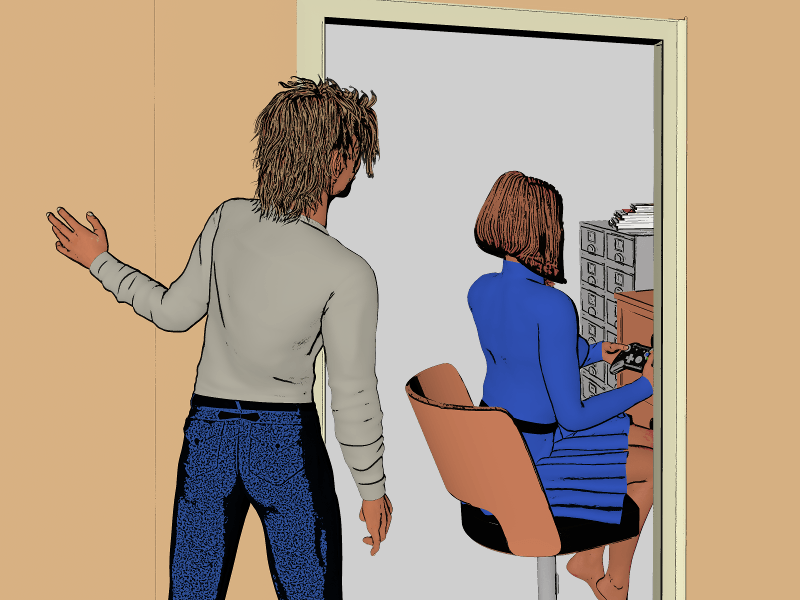 Who's that geeky gawker? Peeking in on Professor Williams?

A middle-of-the-road kinda guy, Jack is basically a nice person. Smarter than most, more of a sex camel than most (long stretches without, in other words). Or at least that's what he thinks -- he hasn't figured out yet that most others lie about their sex lives, make them sound bigger than they are. He's gullible that way.

He did luck out with his young wife, however. She's a cutie. She was an early-bloomer emotionally, a late-bloomer physically. So by the time she became a hottie, at age 19, she had already acquired her humanity. Quite the treasure, that. They married when they were both 20. We'll meet her later.

Jack is 22 now, a teaching assistant while he works on his masters degree.

He was just walking up the hallway when Professor Williams, getting into her video game, caught his attention ...

Fugue: I needed to introduce a male character for the scene -- he just happens to also be our hero.

I also need to introduce his sidekick, Jimmy. We'll meet him briefly next update, then get back to Professor Williams.

And to that insidious game ... 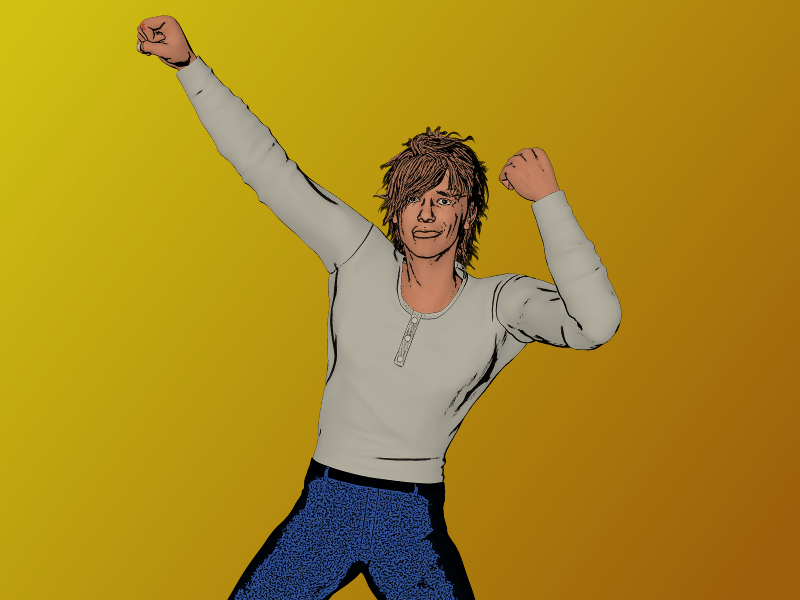 That New Game by Fugue 3 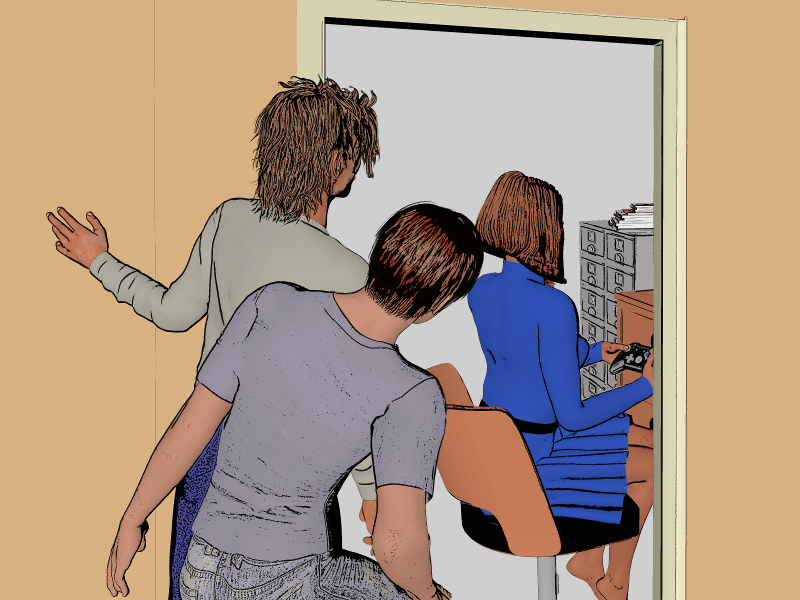 What? Two of them now? Both just looking on, as Professor Williams really gets into her game ...

The second guy is Jimmy, one of our hero's friends. Of course, Jimmy is friends with almost everyone. Or enemies with them. Pretty much just friends and enemies, nothing in-between.

Jimmy was one of those kids that always active, and always had scabs on his knees. He played games on the playground every chance he got, but never really excelled at any sport enough to be called an athlete.

But he'd march right up and say hi to anyone -- to the quiet kid, to the class bully, to the cheerleading princess and her giggling friends, to the school district representative sitting in to observe classes, to the PTA mom setting up for the school dance. No one had more "hello" courage than Jimmy.

And ... he recognizes that game that Prof. Williams is playing ...

Fugue: Sidekick Jimmy (hey, he might even be all right with the term "sidekick") will be a good source of gossip for our more reserved hero Jack. And, yeah, he's heard about this new game by Fugue that the professor's playing ...

In case you hadn't figured it out already, I'm trying out posting "Shorts" every few days. These are quick (theoretically, at least) images and blurbs so that I don't go too quiet on you all while I work on the next version of Dr. Diggler. I'm a storyteller, so naturally they're in the form of little story episodes.

We'll try this for a while and see if I can sustain it, and that it doesn't take too much time away from the main work (like Dr. Diggler right now). If I ever decide to flesh these out into a full graphic novel or game, I reserve the right to radically change anything or anyone in them. These are quickly assembled "shorts", but hopefully you'll find some enjoyment with them.

Now back to work on that fiendish Dr. Diggler ... 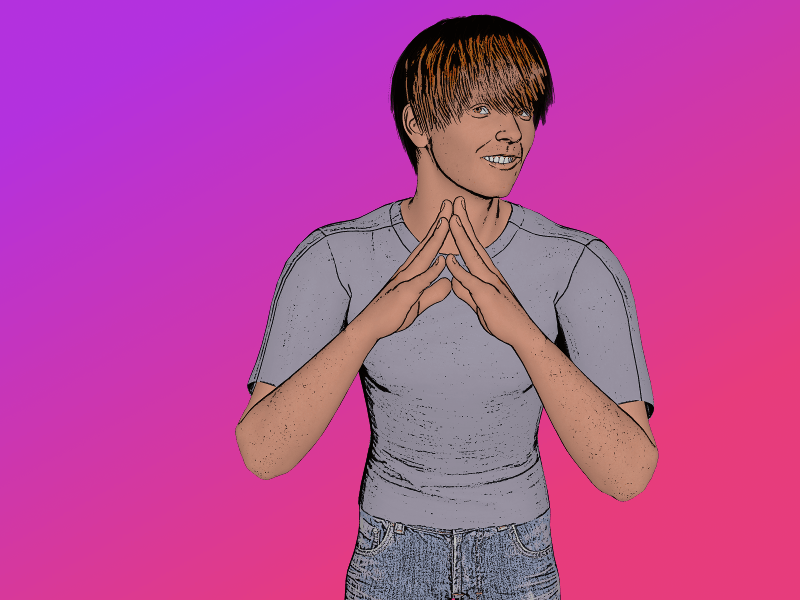 Above is what everyone's seen of Gabrielle (our hero's female best friend) from "Heavy Petting" so far.

She's the brains of their little gang of two, even if she is kinda bossy. In fact, they NEED her brains to figure out what is going on with all these poor women and how to stop it!

Heavy Petting has 8 arcs or so planned, where his female professors fall prey to the titty trances, then his step-sister, then even his step-mom. Finally, in arc 7, even Gabby succumbs. Our hero discovers it, and is horrified, but is too much of a gentleman to take advantage of his best friend. He's worried now -- how will they put a halt to this whole titty-trance thing?!

They keep trying to discover a cure.

Kevin heads over to Gabby's one evening, to check if she's found anything. But he finds her--

He finds her dressed like a SLUT! Her stepdad, it turns out, has been titty-trancing her, and giving her to her sleazy chemistry professor, in exchange for a couple sexy co-eds to play with!

Kevin makes her evil stepdad's life a particular kind of hell (he and Gabby know the most about this whole titty-trance thing, so he has the power to do that).

In between being Kevin's bitch, Gabby continues to work on the mystery, and on a cure ...

Fugue: The test sketches below are just that -- hunting around for the right look. So you'll also notice that they cut the top of her hair off, and a foot and knee get unceremoniously truncated at the bottom. Final images of her will be less sloppy, but I was just tinkering with the look here ...

Below, I initially gave her some makeup: 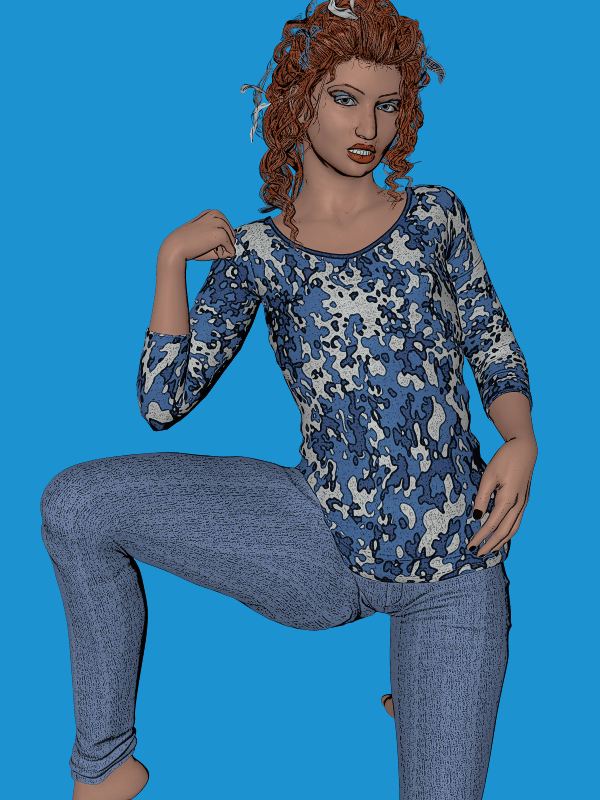 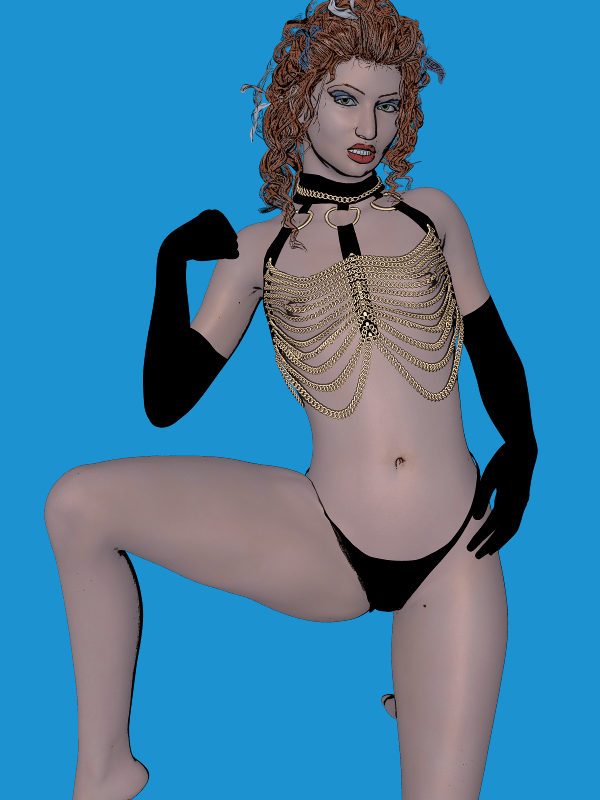 Next post we'll get back to "That New Game by Fugue". Can anyone resist the evil lure of that game?! Or will we all just boink ourselves into armageddon with it?!

That New Game by Fugue 4 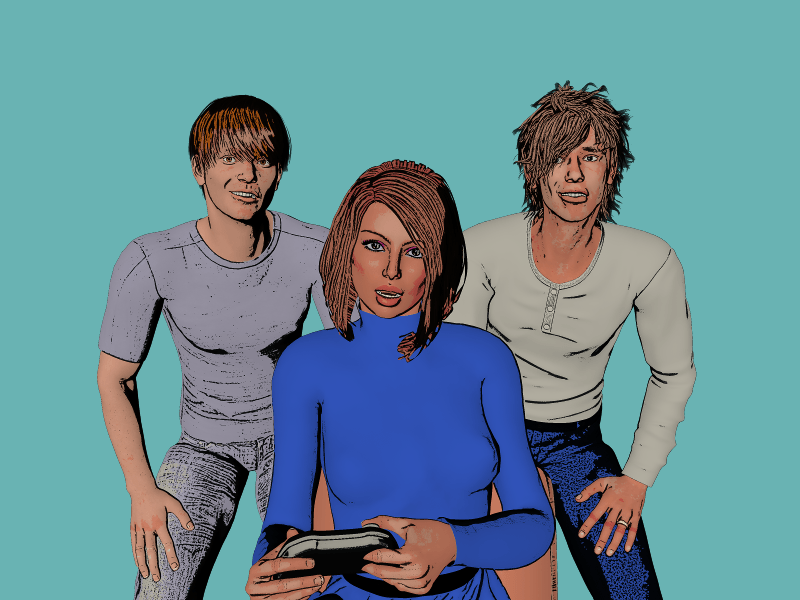 Prof. Williams: As you can see, gentlemen ... I'm sort of busy right now. Maybe ... I can get with you boys after I finish up this round of the game.

Jimmy: I KNOW this game! I've heard about it! People get REALLY wrapped up in it while they play it.

Jimmy: I mean REALLY, REALLY wrapped up in this game. So wrapped up that I'll bet-- I'll bet she'll even let me get away with THIS! 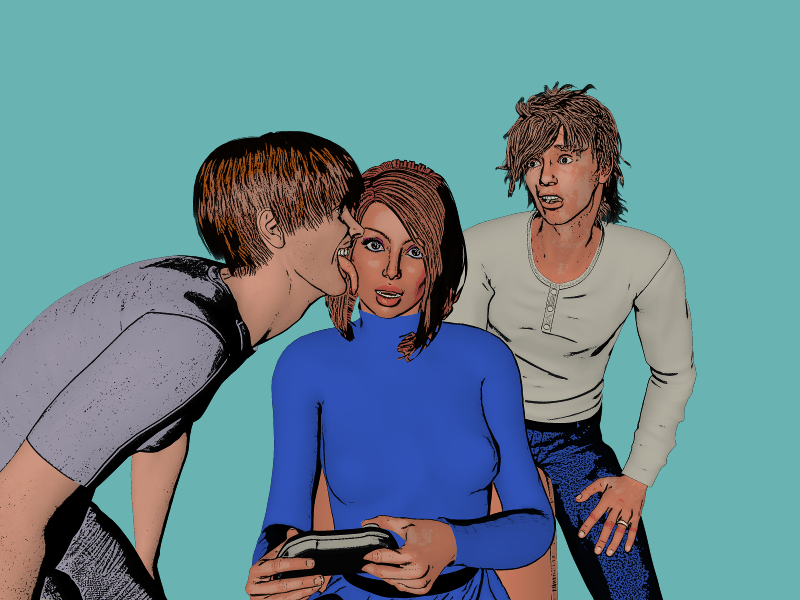 Did he just-- did he just LICK his hot professor's cheek?!

Oh man, that's going to get his butt in trouble ...

That New Game by Fugue 5 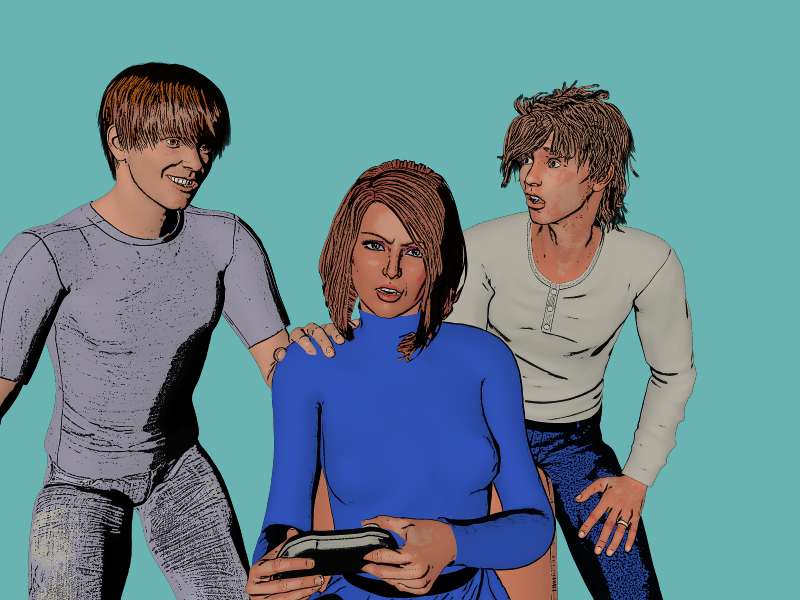 Prof. Williams: Mr Monroe! What the HELL do you think you're-- ?!

Jimmy: Yeah, yeah. Hey, I know how you can get that medallion away from your opponent.

Jimmy: Oh yeah. Okay if I lick your cheek again? 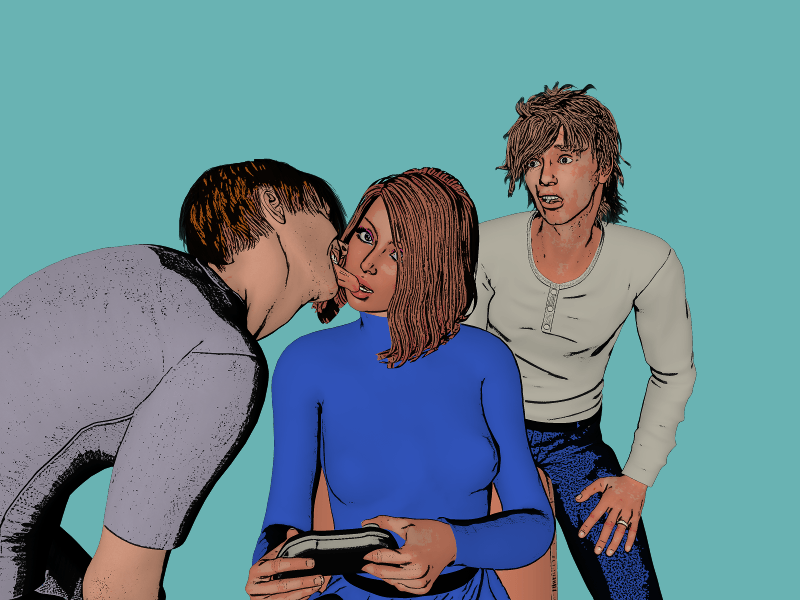 Prof. Williams: Now tell me how to get the medallion, Jimmy.

Fugue: Did she just let him ... LICK HER?! In exchange for game information?!

That New Game by Fugue 6

Jimmy tells Prof. Williams how to get the medallion from her game opponent. She follows his steps, winning the amulet, and is so excited she even relents and lets him lick her cheek one more time while she continues playing.

--there just aren't words for it. It's beyond "in awe". "In disbelief" perhaps? Could Jimmy have even staged this with Prof. Williams, maybe? As a practical joke or something?

His pretty wife Christi is sitting in the kitchen with her mother when he gets there. "Jack!" she stands up, beaming.

God, he loves that her voice still holds that much excitement when she says his name! 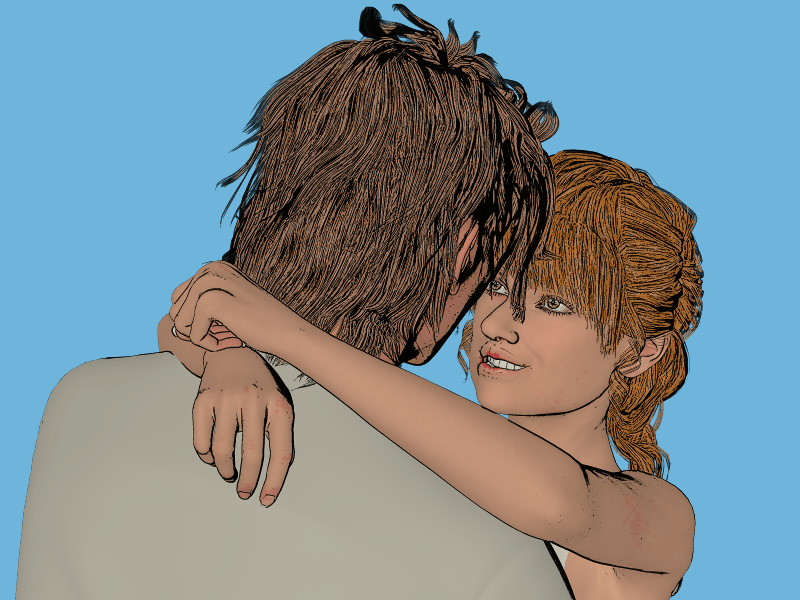 She gives him a happy hug. "I got a promotion at work today!"

"Christi, that's wonderful! You so deserve it, sweetie!" He hugs her back, echoing her happiness back to her, then feels it echoed back to him. That's the thing about true love -- it's so much more than the sum of its parts -- it's the parts summed, and then MULTIPLIED! Multiplied by LOVE!

(Fugue, rolling his eyes: Yeah, yeah. C'mon you two, we have a plot to get through.)

(Fugue, in a disgusted aside to the readers: Lovebirds ... more trouble than they're worth.) 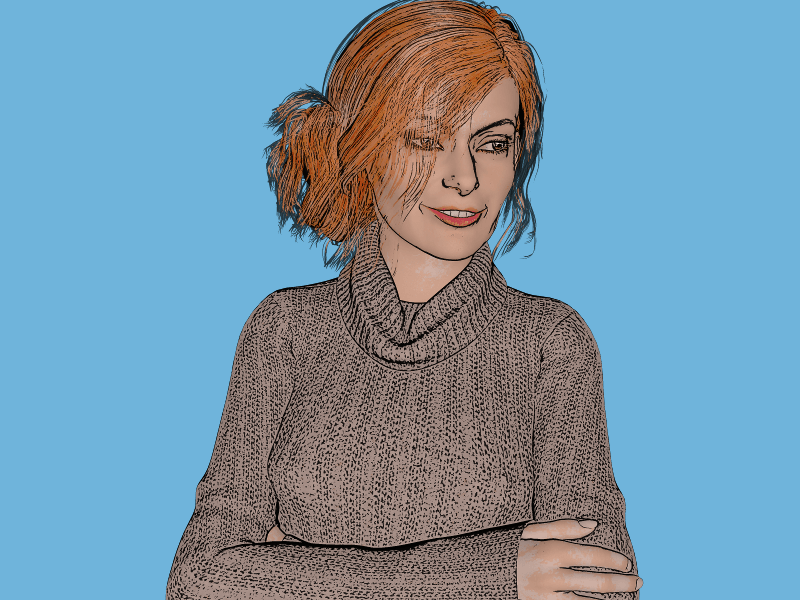 That's Christi's mom, Sharon, beaming at the young couple. They're living with her while Jack gets his master's degree.

She's glad her daughter found someone that loves her so much. And Jack does -- she thinks he loves her daughter more than anything else in the world.

And he's good for her -- and she's good for him, too. They're both better people because of each other. Together, with the love they share, they'll--

(Fugue, short-tempered: Okay, that's it! We're ending this scene right here! I will NOT have you people "pining true love" -- not on my watch!)

(Fugue, in an angry aside to the readers: I won't tolerate it. And *I* hold the purse strings here. If the actors want to get paid, they're not going to improvise. Certainly not about (distastefully) "true love".)

That New Game by Fugue 7

The next day, Jack passes by Prof. Williams office, and sees her playing that game again.

Jack: I need to apologize, Prof. Williams, for yesterday when Jimmy ... LICKED you. I-- we're both-- sorry.

She seems to be concentrating so hard on the game that she's literally non-responsive. 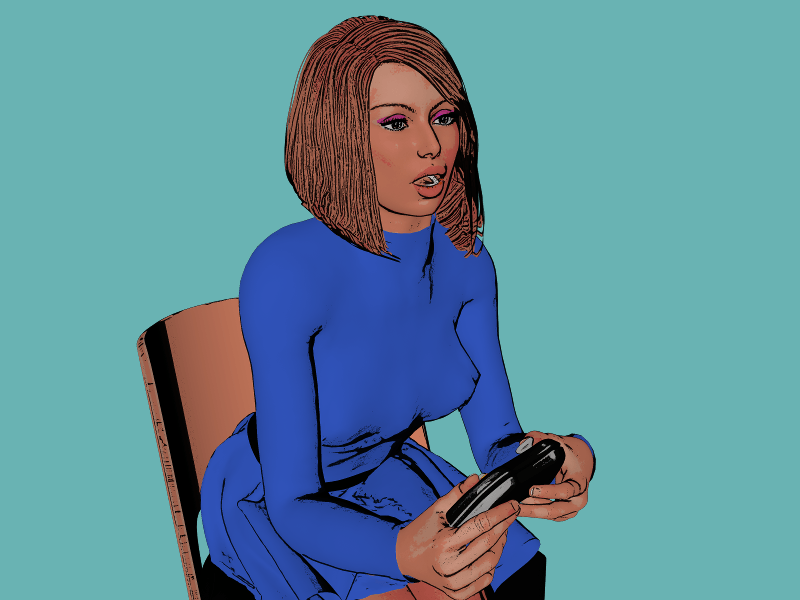 Being careful not to look at the screen -- in case it's causing her seizures or something -- Jack prods Prof. Williams.

Oh man! He read about video games causing epileptic seizures in some people -- he doesn't want THAT to be happening to her!

He hurries back to the TA's common room, to get his jacket. He figures he can use it to cover the monitor, and see if that snaps her out of this.

When he returns with his jacket, though, she seems to have come out of her trance.

Jack: Prof. Williams! Are you okay? A few minutes ago, you were zoned out of-- 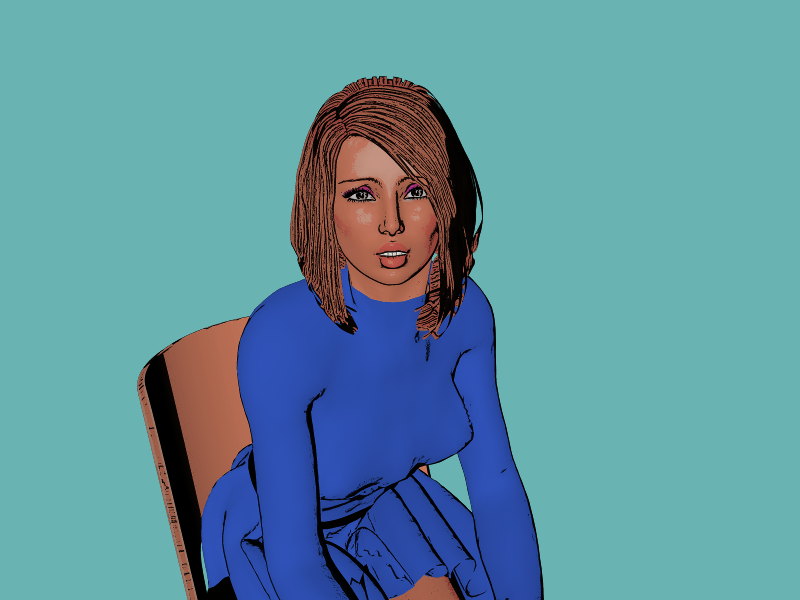 Fugue: Well, the first step towards fixing a problem is admitting that you have a problem ...

That New Game by Fugue 8

She tells him that she just lost another round to Paul Jones, a college upperclassman.

Jack: (shrug) So you lost some game points to another player ...

No, he assures her, it doesn't work like that. Games can't ... directly affect reality.

But it DOES, she insists! Paul defeated her this last round by using a power card. An ... obsession power card. 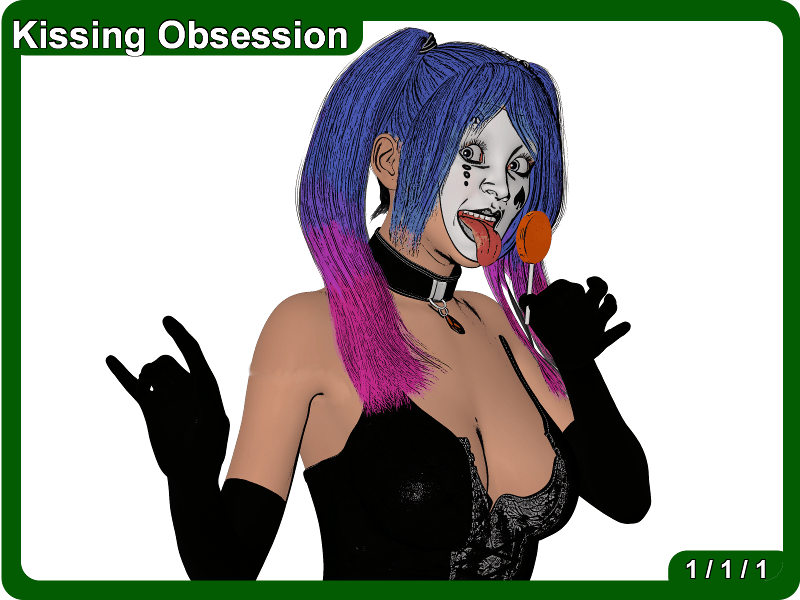 When invoked, the power card turns into a lollipop. And, in the game, he licked it, then handed it to her. And she ... in defeat ... licked it too. 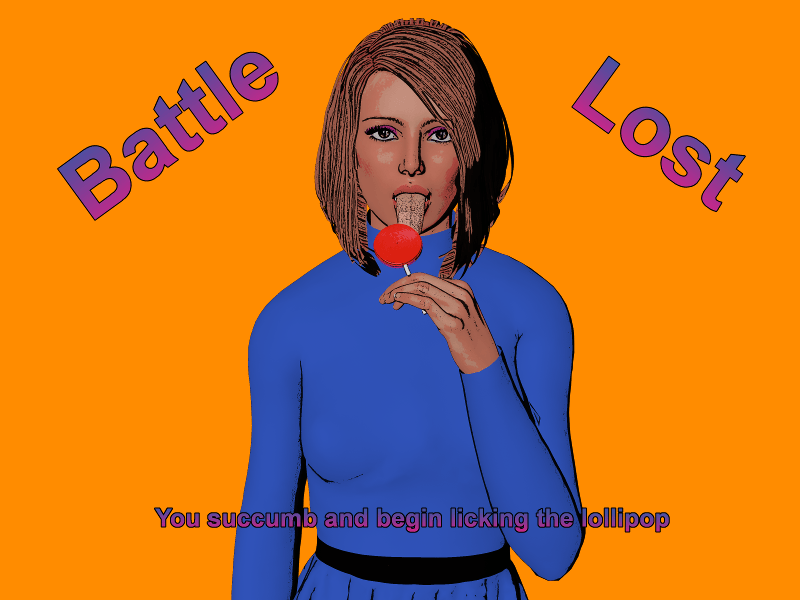 That's-- that's the same way he defeated her last week! And she-- she couldn't stop thinking about kissing him afterward then! She found herself ... OBSESSED with KISSING him!

He showed up at her house one evening -- in real life -- and they made out for two hours! HER! With a STUDENT!

Prof. Williams: Please, Jack! Please help me! I can't defeat him -- the more times you lose to a player, the less chance you have of beating them. I'll just keep losing. And there are ALL KINDS of power cards in the game -- many a LOT MORE risquee than KISSING! He'll get his hands on one, and I'll just ... DO things with him! For him. I KNOW I will! I won't be able to help it, but to-- to-- It'll be HUMILIATING!

Prof. Williams: Play the game -- I'll show you how. Then ... please share some of the artifacts that you win, some of the power points, with me -- so I can resist whatever it is that Paul is DOING TO ME! PLEASE, JACK!

Will Jack do it? But if playing the game has gotten her into this much trouble, what risk to Jack himself? Could HE get stuck in the game, trapped by its dangers?

Or as he plays the game and acquires power ... (Fugue's poor impersonation of James Earl Jones here) might he succumb ... to the darker side?

Oh, hey, yeah: I tried coloring the text according to the speaker this time -- just a stylistic experiment for the end of the month. If anyone really likes it or really doesn't like it, let me know. I think it makes it slightly more obvious at a glance who's talking, so I may keep it.