The "Model the Choker" sequence is a fun one! We get to see a lot of Trish, plus it sets up the plot for the "2nd Romantic Date" and "Double Date" sequences, which will be even more fun.

With Bryan getting naked in this sequence (warning readers/players: Bryan does get naked), Trish ... well, she gets a little stirred herself. Our couple doesn't "do it" -- at least not yet. But sexual juices do have a way of lubricating the mind as well -- not enough to make anyone do something they would not otherwise do, but still ...

Despite herself, Trish finds her gaze rapt on Bryan's ... And this leads Bryan to recall that ... And then he accidentally ... Well, Trish then rushes to the ... And Bryan -- well he comes in and ... causing Trish to ... And, well, that's never happened before! Which is really not the way it ought to happen the first time. Whoo-boy ...

I have the first 1/3 of peek 1 available for patrons of any amount (even just 1$). I'll post the link to the peek for them shortly. I ought to have the 2nd third of peek 1 ready in a couple weeks, and will make it available then. 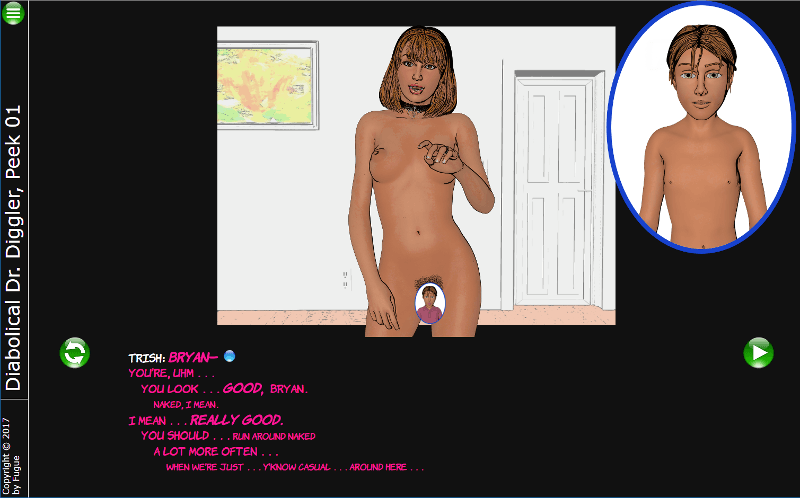 The first two-thirds of Dr. Diggler Peek 1 is now available for 5$ or more patrons -- I'll post the play-online and download-to-play-offline links for them shortly.

) ready in about two weeks.

Then, onto the second romantic date -- boy, do I have plans for that one! 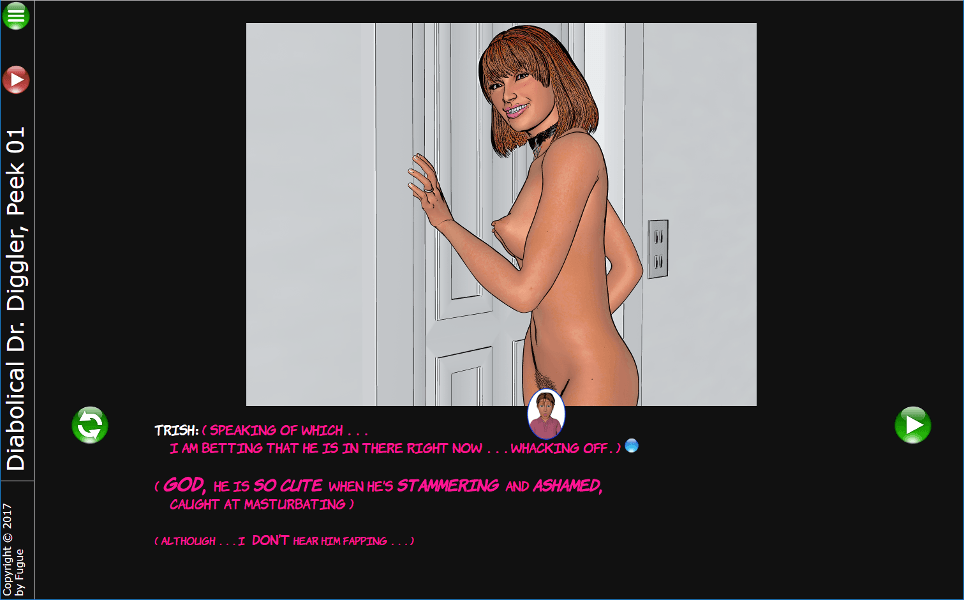 Another Peek Image from "Trish Models the Choker"

Well, I promised my 1$ patrons another preview image. Rather than another image from part 2, where Trish is mostly clothed and sneaky, trying to catch Bryan in the act of whacking off, I selected an image from the third and final part of this sequence. What's occured to lead to this image? Accidents happen. While not actual sex, they are still embarrassing enough. Poor Trish is swishing her mouth out at the bathroom sink, and will soon be ruminating on exactly how her life went off the tracks here (little does she know, things have only just begun ...).

I'll be posting part 3 next weekend or so, for 5$ or more patrons (and eventually for free to everyone when the next version of the game is released).

Up after that will be previews of their second romantic date, mostly for 5$ patrons until the next game release. I'll also be releasing soon for 10$ and above patrons, an interactive/graphic story/preview that I started before last Christmas and just need to finish up for them.