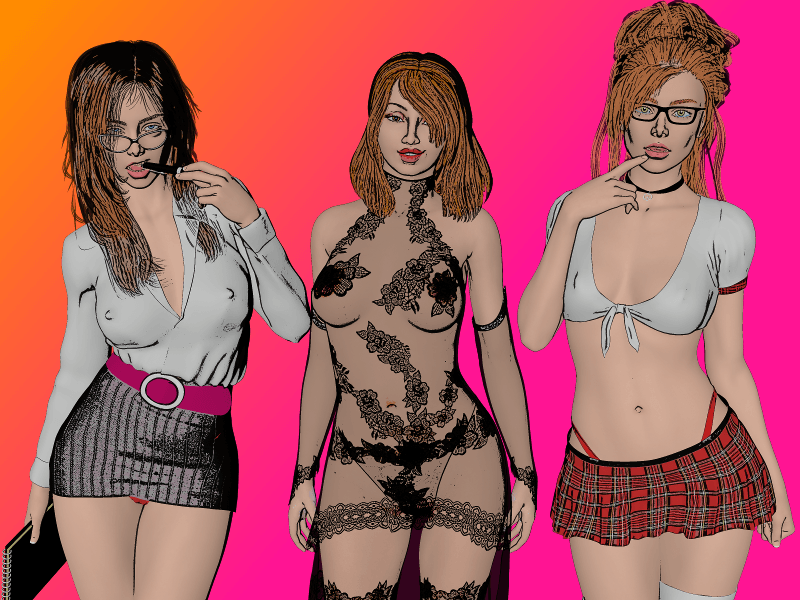 Okay, my easter egg for Dr Diggler chapter 3 has gotten big enough to split into parts ... We'll get a big part in this release, and other parts in later releases.

I'll go ahead and reveal that it's about Dr Diggler compromising Lisa, Bryan's ex-true love. Nowadays she's just Diggler's sexy little plaything, but we get to go back and see how she succumbed to the diabolical Dr Diggler. You take on the role of Diggler for the easter egg mini-adventure :)

That's our Lisa in the middle of the image above, of course -- the character that we voted on and created together a few months ago. Now Dr Diggler helps clarify her thinking a little.

The lady on the left (the brunette), by the way, is Lisa's BFF Pauline; and the lady on the right (the redhead with the up-do) is Pauline's mother, Professor Linda Williams. Professor Williams immensely disapproves of the antics that befall wherever Dr Diggler goes ...

Will Professor Williams be the one to dictate what Dr Diggler is and is not permitted to do? Will she be the one to finally domesticise the wild wolf into a passive little puppy?

Hell, can she even manage a stand-off, with Dr Diggler keeping his distance from her and hers?

Or ... is she needed for some other of Dr Diggler's diabolical purposes?

We'll still have our usual escapades as well, with Trish trying to resist Diggler, and the other Symposium shenanigans.

I'm also going to widen the release of The Whores' Whisperer 1a to 1$ patrons, as promised. I'll post the URLs for that shortly. 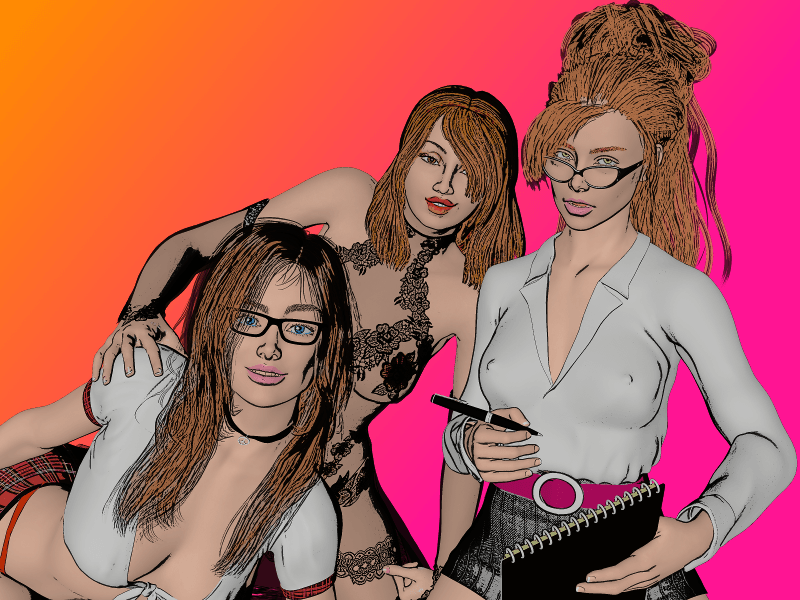 First up, the first installment of the loyalty bonus is up -- just under 200 passages. For those folks that continued their support through the last several months and even when I had to slow down slightly during Feb and Mar this year, I sent you a URL a couple weeks ago, on April 12. Go check that link to find the first installment for your bonus. I got it up late last night for you. The second installment should follow in about a month, with over 500 passages. Then the third and final installment will likely follow about a month after that.

Second up, Dr Diggler. Working on the next release for chapter 3. I have half of one adventure and 1/3 of the easter egg completed. (In the easter egg, we temporarily take on the role of Dr Diggler as we crack open and sluttify the golden sweetheart Lisa, Bryan's true love at the time. Though ... well, she won't be for long, with Dr Diggler's attention on her. One third of the easter egg will be in this release, and 1/3 in each of the next release and the final release.) That leaves about 1.5 adventures and some scenes with Trish succumbing to Diggler's evil machinations.

Third up, the attached images? That's just an idea I doodled up last night while goofing off watching television. "Control Group" is the other project I'll be working on, later this year. Lots of pretty ladies falling prey to lots of insidious irresistible seductions. Two of our lesser villains are Lenny and Moose (I may name Moose something else, but "Moose" serves as a stub for now). Moose is a more traditional evil jock; Lenny is a more modern evil gamer. With a superheroine fetish. So Lenny loves to see Liberty Girl ... take it up the butt. No, no, literally.

In the last image, he's explaining how the Evil Dr Calm makes her just "okay" with EVERYTHING -- even getting FELT UP by her arch-nemesis, a supervillain like him. Poor gal is just too serene and peaceful to work up the indignant outrage to ... well ... y'know, everything is good and fine and all ... happy-happy thoughts as she gets groped by the lascivious young man ... all is good ... 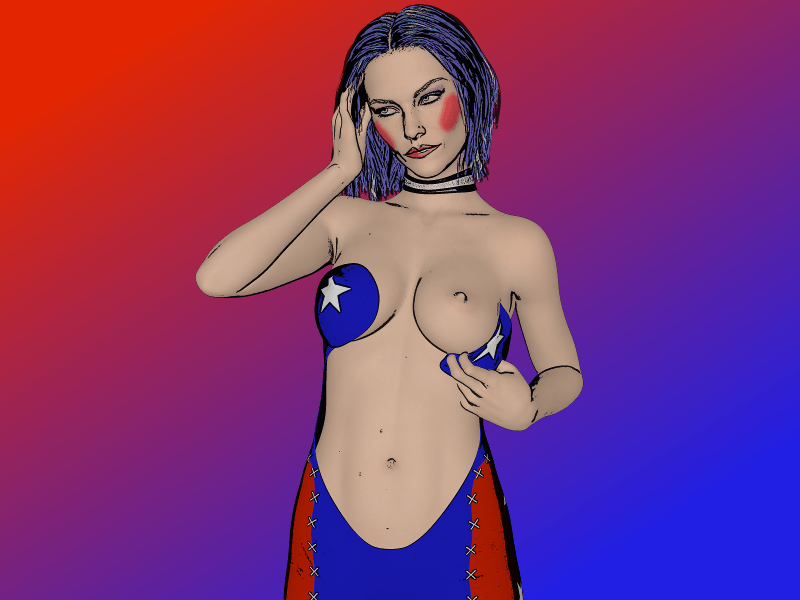 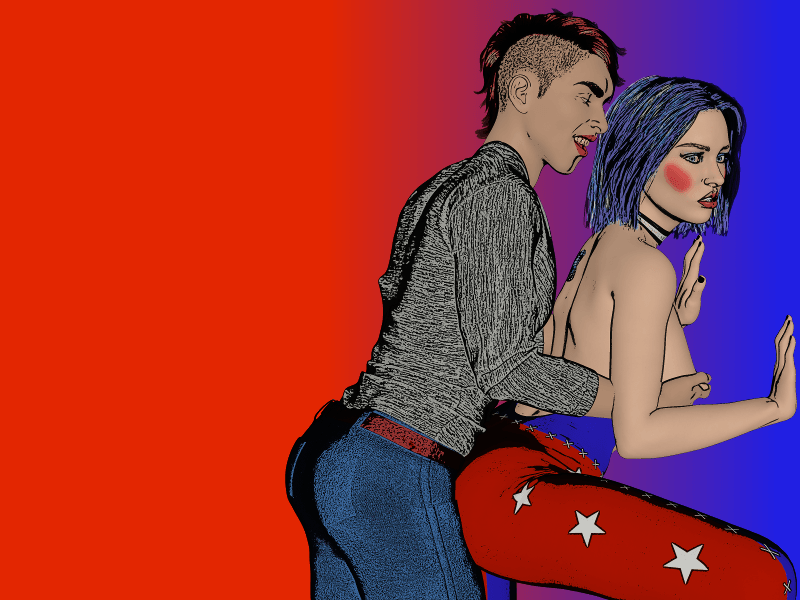 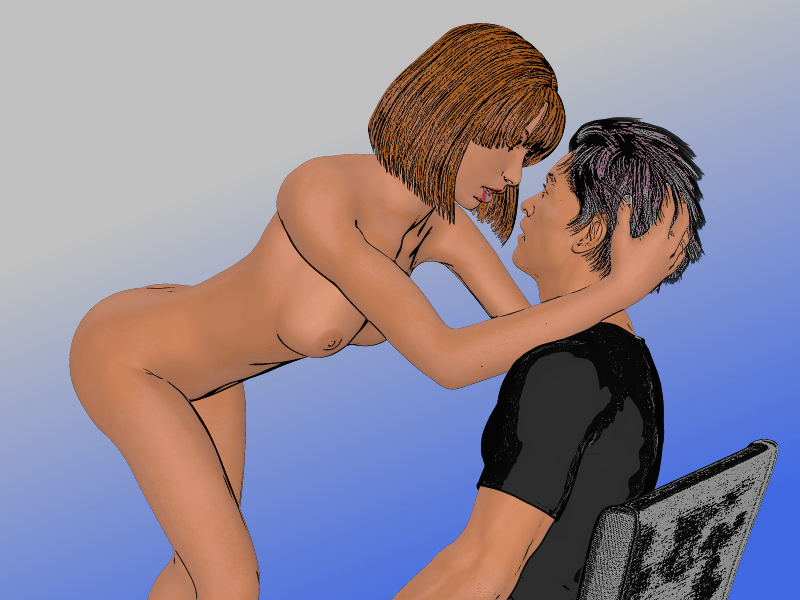