Just a Note of Progress 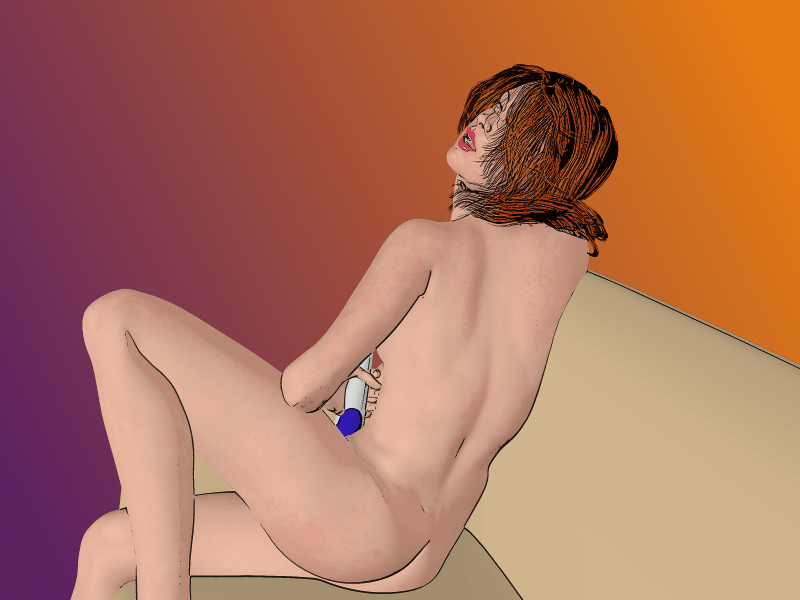 Attached is an image from preview 4 of Dollars and Sins (if you're viewing from Patreon, Rob's head is stressing out over the good parts -- go here, http://www.fuguetales.com/blog201604.html#blog20160401, to move Rob's darned head out of the way).

These previews are deviating a little from the text story (book 1 of which is now fully released! expect two sequels in months to come) -- but remember I said it was based on the text story, not an exact copy of it.

I've been aiming for the last month to release preview 4 around next Fri, Apr 8, then to go back to Dr. Diggler and make some more progress there for some weeks. I wasn't happy with some of the images in preview 4, so went back and redid them from a better angle, which took some time. I'm still aiming to get preview 4 to you next Fri if I can, but it's possible it may slide a week, depending on whether my mundane job fits into 40 hours or not.

Back to writing and illustrating now ...

Springtime in the northern hemisphere 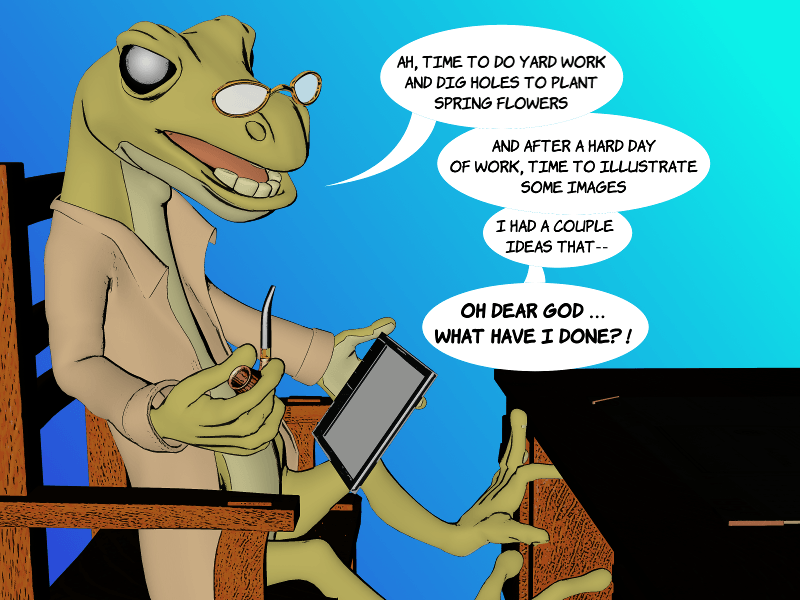 Ah, springtime in the northern hemisphere. Time to rake up the winter's debris and dig holes to plant new spring flowers.

And after a hard day's work outside, it's time to sit down and illustrate some images for you guys. I had a couple ideas that I wanted to--

What HAS Fugue done?! In the next day or two, I'll post what our hero has discovered ...

On a related note, I'm not going to push to get "Dollars and Sins preview 4" done by this weekend. If I do that, it's going to be half-assed, and you guys don't deserve that.

What I'm going to do is push it to weekend of the 16th or 23rd, which will give me time to finish properly instead of just getting something out there (just to say that I made the self-imposed target date).

Don't worry -- I have a couple bonus images that will (hopefully) entertain you all during the week or two delay. And thus we're back to our hero's melodramatic plotline above. (quivering voice:) Will Fugue survive? (eyeroll:) Probably, yeah ... but I'll weave the bonus images into his tragic little tale ...

I'll give another update on Fugue's plight in a couple days ... 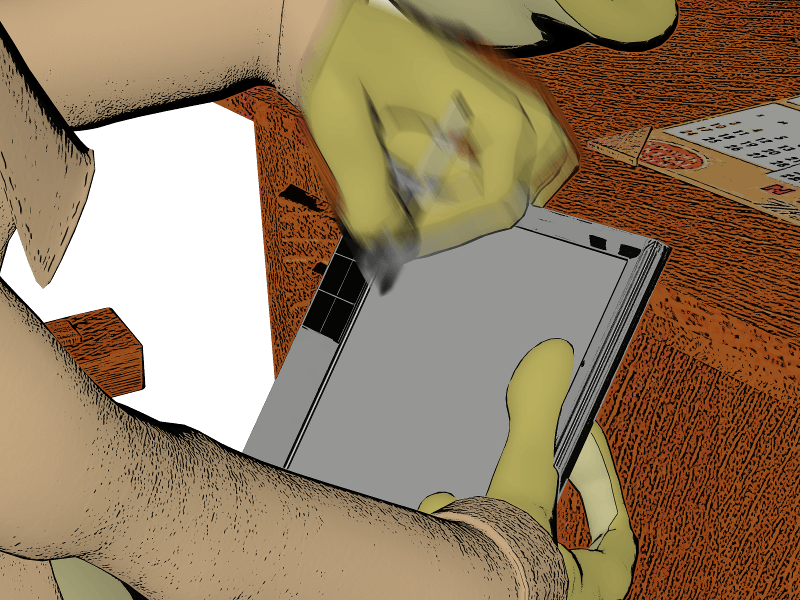 When last we left our hero, he had finished some yard work and sat down to illustrate some images for his absurdly popular Patreon site. But ... something is wrong?!

Ohgod! What have I done to my puny artists arms?!

I may ... never illustrate again?!

So I (the non-melodramatic part of Fugue) told Fugue: chill, guy. Everybody's hands tremble slightly after the first yard work of spring if you've been lazy and sitting on your butt all winter. Just start on an image and see how it turns out.

He (the melodramatic part of Fugue) was quiet a few minutes while he worked on a picture before speaking again:

That-- that's not what I was trying to draw!

That's not it at all!

My trembling hands have corrupted what I was trying to draw!

I coulda smacked him ... (Have I mentioned that I'm the non-melodramatic part of Fugue?)

Anyway, up next is the twisted image that Fugue did not intend to draw at all ... 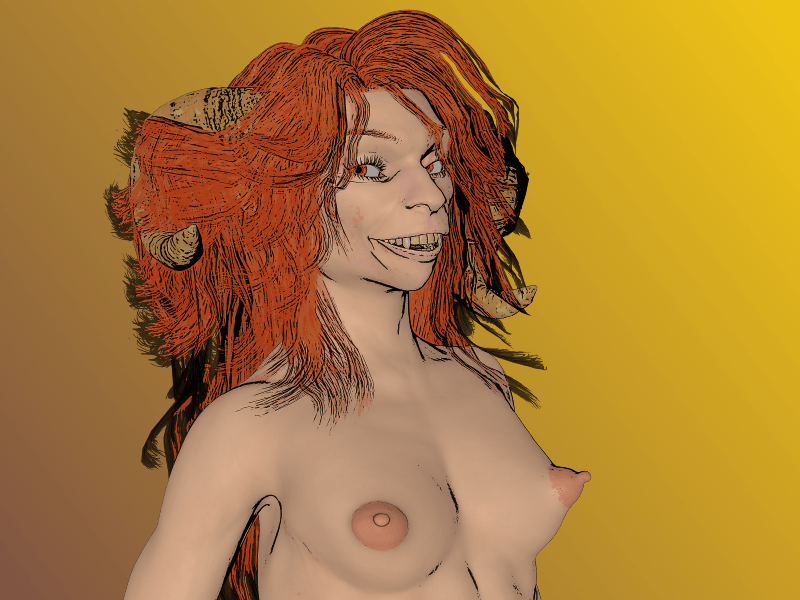 Ohmygoodness! That isn't the image I was INTENDING to make ...

My trembling hand (it's complaining about being oppressed by yard work!) CHANGED it from what I planned! 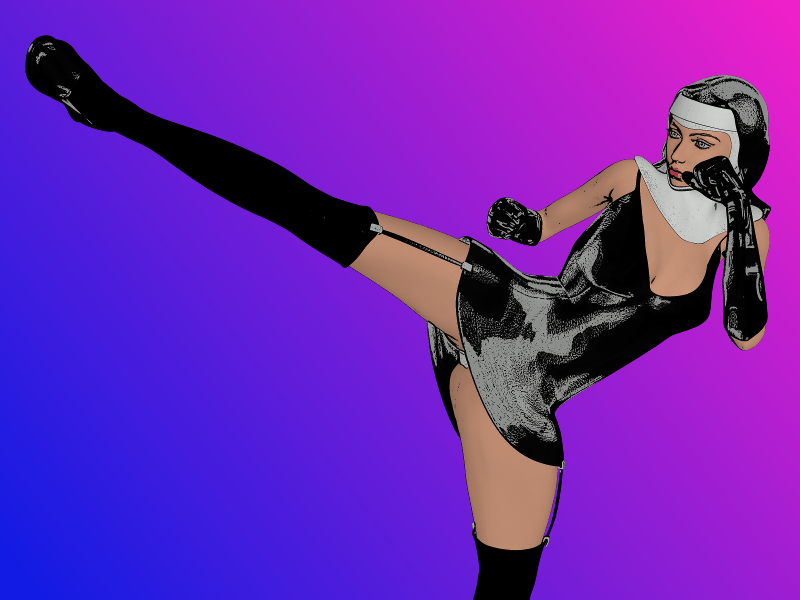 Melodramatic part of Fugue: now THIS is what I INTENDED to draw! A whole "fighting nuns in heels" thing!

(sighing to audience, shaking head) Do you see what I'm up against here, folks? 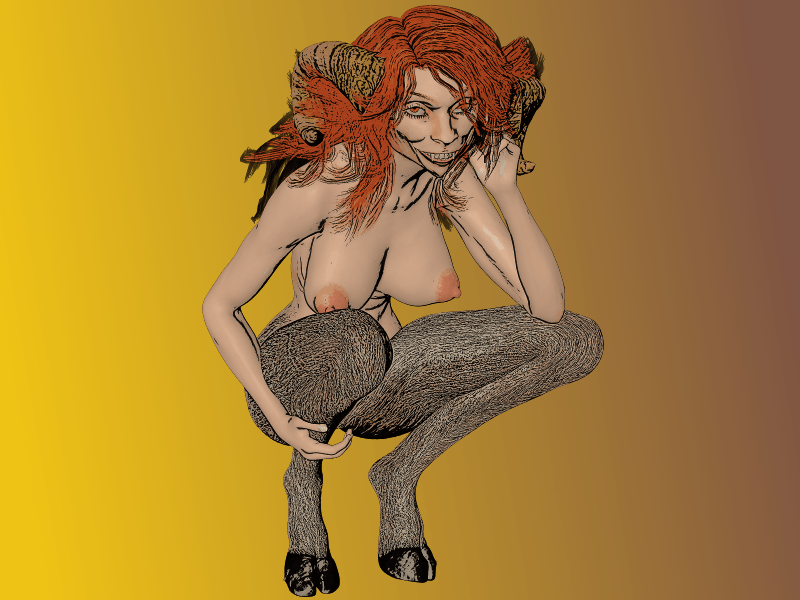 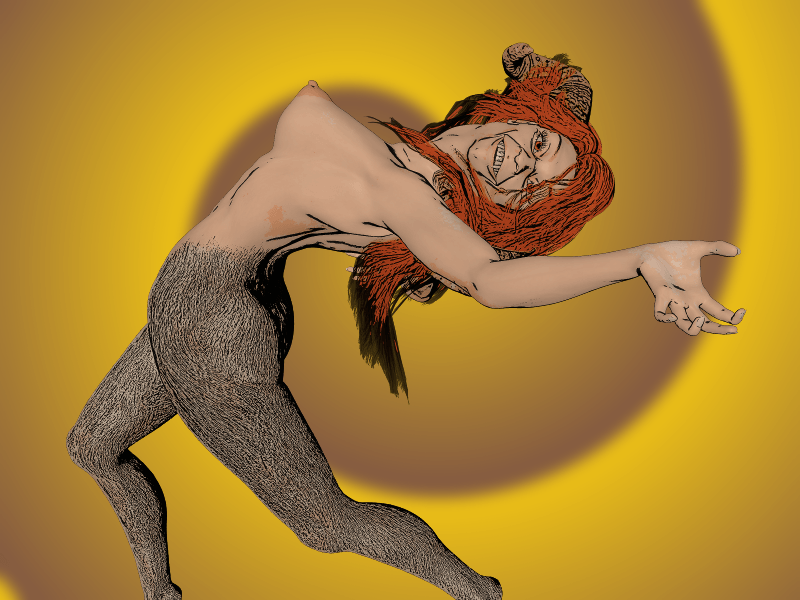 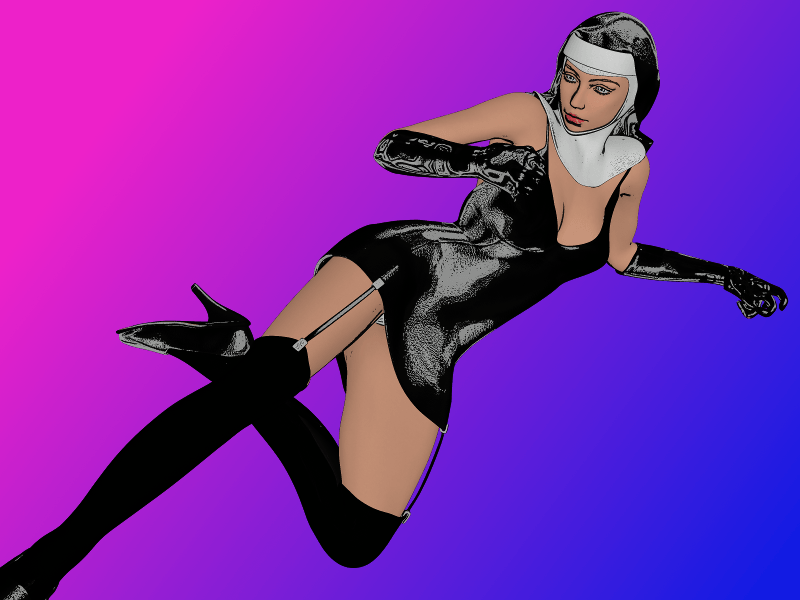 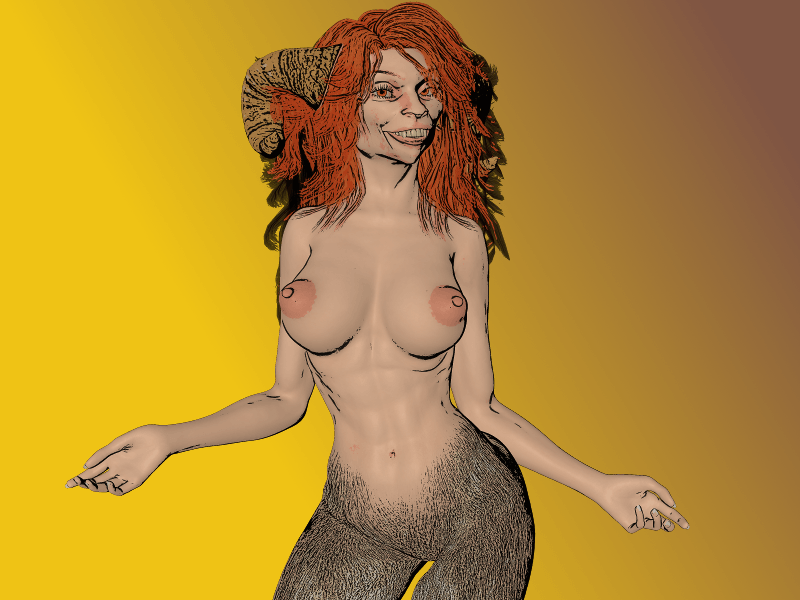 Moving on -- Dollars and Sins Preview 4 should be available this weekend for full ($10+) patrons as a big "Thank you!". I'll send out a Patreon message with the link.

I think I'll still have one or two extra images of Sister Angela after the weekend, that I'll post early next week.

And it's on to Dr. Diggler again then, to see how much I can get done in this next push (corrections, the rest of level 2 and most of level 3, is what I'm aiming for!). 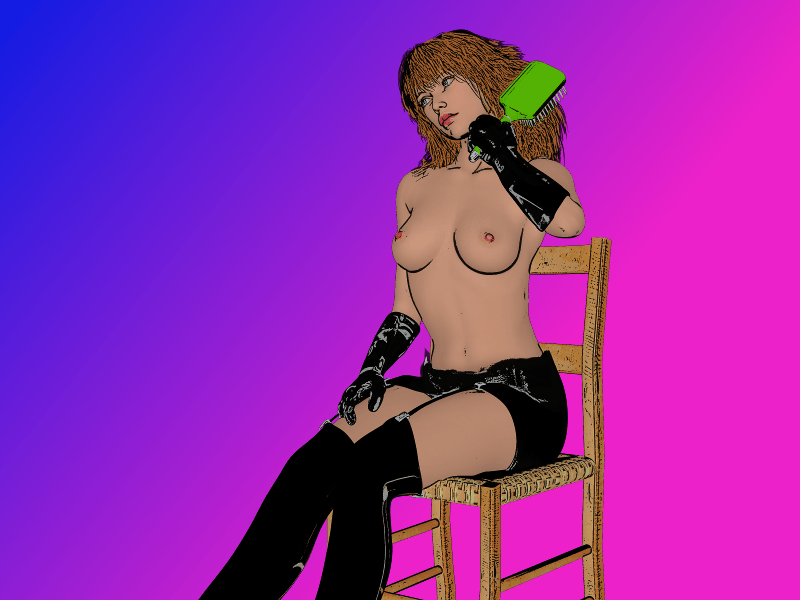 She's actually quite the kisser too -- but she just has to kill you afterward so that you don't blab to her archbishop.

(If you're reading this from the Patreon post, there's a second image of Sister Angela, a little shocked at your daring gape, here: http://www.fuguetales.com/blog201604.html#blog20160420.) 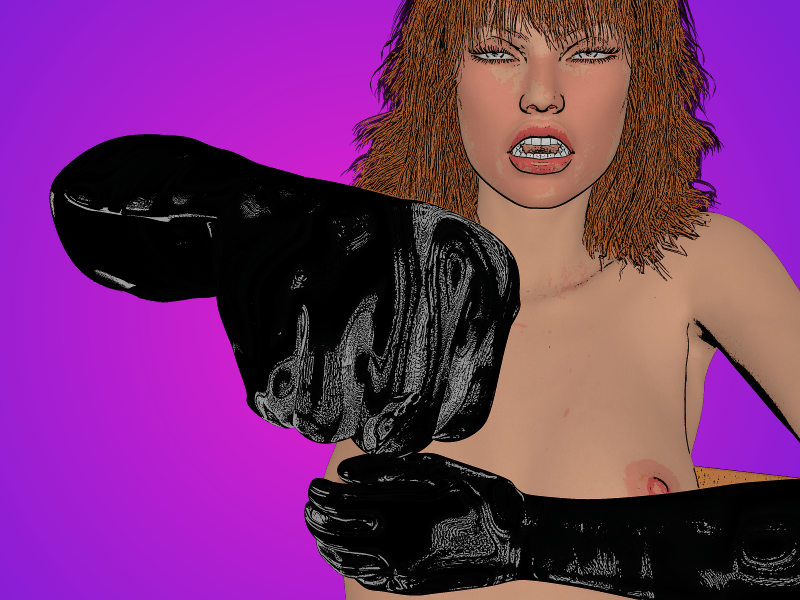 Death by beautiful woman. Or at least a sound bruising by. 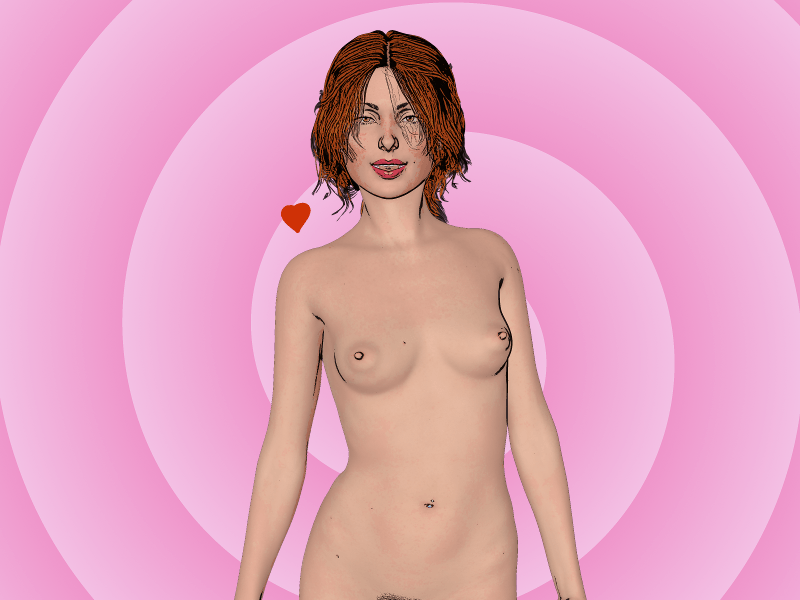 Dollars and Sins Preview 4 is up! I'll be emailing current full patrons with the link shortly.

Whew! It's 105 "pages", and there was a section in the middle there that I fought to get the viewer's angle right so that Madolyn didn't have to do yoga twists to do what I needed her to do. So I wound up redoing a bunch of panels -- (rolling eyes) it felt like a director refilming scenes because they weren't blocked out well enough during rehearsals ...

I also tried to emphasize a slightly different plot angle here than in the text story. How do we use the arcane dollars to not only get Madolyn to do things, but to get her to like -- and even love -- doing them? All this despite her knowing full well that Rob is trying to sway her mind, and her being dead set against that. The devious little bastard manipulates her mercilessly ... until she gushes thanks to him for doing so.

Well, back onto Dr. Diggler now! I've been jotting down notes and ideas, while I work on other things, for several weeks now, and am excited to start to work on them! I need to pull out my old plot diagrams and figure out where I can fit the new ideas in.

I'm still working on the best way to do those, by the way -- the plot diagrams. I'm wanting to "draw" the plot with little arrows and notes, to keep it all organized and workable. My "diagrams" still aren't working the way I want them to yet, though -- so I'm still revising how I do them. For example, what's the best way to progress the same scene, based off events happening elsewhere in the game, so that it evolves during game action, and plays out differently at different times -- and to keep all that straight and consistent?

If anyone has any good methods or ideas for how to diagram game plot, I'd love to hear! (Otherwise, I'll hew it out of the aether myself and share my best discoveries with others that might be interested.) 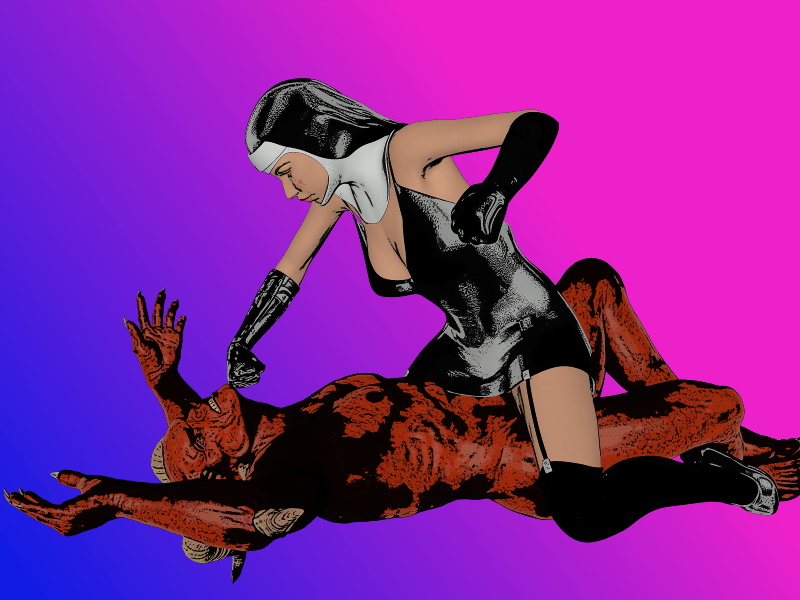 Sister Angel at work, beating the crap out of the bad guys and mopping up demonic ass.

Poor fella doesn't know whether to be defeated or aroused ...

I have a couple Sister Angela images left over -- this one and another that I'll post later this week. 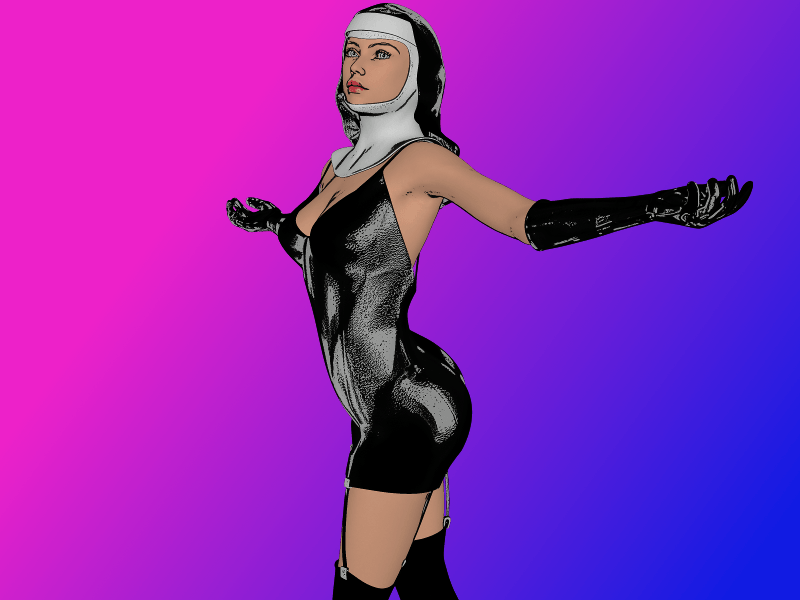 After a hard day keeping the world safe for humanity, our heroine takes a victory lap.

Boo-yah! Chicks like that may give their bishops and cardinals headaches, but they make the Big Guy proud!

That's it for the Satyria and Sister Angela images I put together (for now at least).

Oh, and Fugue's puny artist's arm has finally stopped shaking! His girlfriend drags him out to do yard work now, then he draws WITH IMPUNITY, SCOFFING at puny arms! HA! His arms are the OPPOSITE of puny! WHY, HE's--

What? Yes dear, I'll keep it down in here.

I'm batting around an idea for updates while I labor with Dr. Diggler (which is a several-week task). Let me bubble it around in the dark recesses of my mind a little longer, to get it properly corrupted, then I may trot it out in the next week or two.

Everybody have a great weekend!